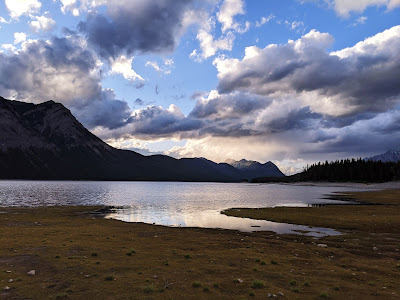 A short while before we pulled into our campsite at the Lower Lake it started to rain. We thought to unload the car and realized that would be a bad idea, better to sit it out and hope it ended soon. When the first break in the clouds came, we raced to put up the tents like it was a game show. Within 10 minutes we had both up including ours wrapped in tarps. Yay! 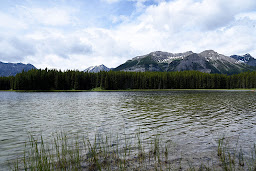 This was, hands-down, the best camping experience of the trip. We have learned some hard lessons about choosing distances to water and bathrooms, walk-in vs. pull-in, and campground amenities. This one had drinking water, and it was right by our campsite. Our site also had a tiny creek running through it, which was both pretty and a nice source of white noise. Terry and I took a few short walks to various points around the campground - this one had several hikes that started from the grounds - and admired the lake and the mountains. The campground next door had showers (!!!) and for next year we want to aim for that one. Right now I think my tolerance for not showering is about 3 nights, during this trip we only had two consecutive campground nights so we didn't push that threshold.

Although we have become expert on the speedy tent setup, the other efforts of putting together a campsite and making it livable have led us to swear that in the future we will only camp if it is at least 2 nights but preferably 3-4. Excepting our next camping adventure, as it is only one night and the campground has no availability the day before or after. Oops. 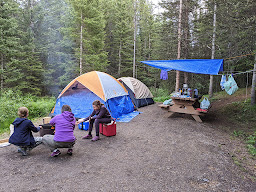 It stayed dry enough for dinner and s'mores, but started raining a bit before bedtime and this is when the downside to having two tents really showed itself. The going back and forth for goodnight rituals became a big wet pain. The sound of the rain on the tent was nice, and things only got a bit wet on the edges or where things touched the outside of the tent. We hadn't staked the rain shields because of the gravel pads we had to set up on - next trip we will carry better stakes and a hammer or mallet to drive them in - and if they has been held away from the tent body I am pretty sure things would have stayed a bit drier. As it was, it wasn't a big deal.

The next morning was gray and grumpy. We did a short hike that nobody appreciated, broke up camp, and headed out to the next place.

Sibbald Lake is mentioned here as a good beach to visit from Calgary. It being more in the prairie than the mountains we'd been in all week, we figured it might be warmer and a dip could be possible. It's really cute that the article mentions digging in the sand and there being a beach. We circumnavigated the entire pond. This is not a thing, or if it is a thing it is in the part of the waterfront set aside for the Boys and Girls Club. We did walk through it because we were already halfway through before we saw signs telling us it was private property, so we wandered quickly, but only noticed one sandy bit that could hold maybe 5 people. And a guy was fishing there, below the sign asking people not to trespass or fish. As we were trespassing, I shouldn't really get too judgy.

By the time that jaunt was over it was close enough to checkin time to head to our campsite and set up. As we used our provisions and realized we weren't getting into clean clothing every day, the number of bags and bins we needed to unearth each day got a bit smaller, and setting up camp got a bit faster and easier. The major downside of this campground for us is that we were as far from the bathrooms as we could possibly be. This could explain why all campsites were full except for about 3-4 that flanked us. It was almost a 20 minute round trip.

As our last day on the road, we had an "anything goes" attitude. I didn't make anyone hike anything. And of course there were s'mores after dinner.
Posted by Lynne at 10:00 AM