Terry likes to play around with woodworking projects. As previously mentioned, wooden pallets are routinely available for picking. The three-tiered planter featured in the last post is one such pallet creation.

Before one can start working with pallet wood, one must first disassemble the pallets to free the wooden planks from all its other wooden plank neighbors.  Crowbars and hammers play a role here.  All the nails must also be removed.  It is a bit tedious when you are talking about removing five planks from each of a dozen pallets.

We have an accumulation of pallets. The weather is beautiful. The kids have a day off from school today (that sounds weird to say, I know, but it means that had they actually been in school they would not have gone today, and the child who does get daily assignments didn't have any for today). Put that all together and we get - Workforce Friday!
Posted by Lynne at 5:08 PM No comments:

We were lucky enough to get a spot in one of the two community gardens we applied to. Then, after we got that notification Terry found a few spots in the back yard where he thought we could grow a thing or two (it is so shady back there we wrote it off at first).  On Canada's version of Craigslist - called Kijiji - there are often pallets available in peoples' yards for free. It is an entirely contactless experience, if also sometimes a disappointing experience when someone else grabbed the best wood just before you get there. Terry picked up a few and made this awesome planter, which will eventually be mounted into the fence! We're planning a row of lettuce, a row of various herbs, and a row of spinach because one of the children will actually eat spinach (as opposed to chard or kale) ... as long as we refer to it as lettuce. The sacrifices we make for our children's health. 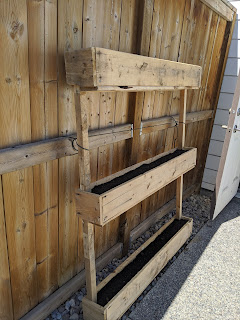 The community garden had a socially distanced tour Saturday morning and Terry went, as this is definitely more his thing than mine and we had a hunch there would be some good tips shared and local gardening in general and the mechanics of this community garden in particular. He came home as close to elated as his stoic self ever is.

After dinner the whole family went down to be introduced to our garden bed - they are all raised beds and each is named for a flower, ours is Aster. Terry and I measured and planned and planted the few cold-weather direct-sow seeds we had - radishes, beets, snow peas, and lettuces. The kids played in the adjacent field, creating some kind of disk golf game that involved their fleeces as "home bases" and Alex's shoes as markers of where the disk last landed. 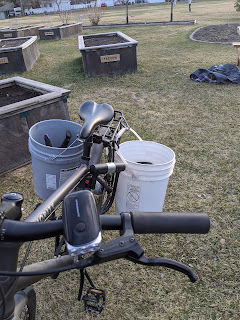 Look at Terry's super fancy "saddlebag" system for his bike!  He designed it himself, and the buckets handily hold garden tools, seeds, and as necessary - dirt.
Posted by Lynne at 5:48 PM No comments: