Almost on the Register

On Friday I learned that my security and medical clearances were finally complete and my file sent to the final suitability review.

2 points about this:
1. I took the Oral Exam on June 13. That was more than 4 months ago, and State has allegedly sped up the process in the last few years.
2. Especially in light of #1 - I already have a Class 1 (anywhere in the world) medical clearance granted by State, and a Top Secret clearance also granted by State. And still it took 4 months to get here ... and technically I'm not even "here" yet.

Let's just say there's a bigger problem afoot than my personal problems if anything goes foul in this last step. Here's hoping for another FSO update in the next week. On the other hand, things finally starting to seem real and tangible might just be why I studied Russian over the weekend for the first time in about a month.
Posted by Lynne at 12:08 PM No comments:

I know, it's getting tiresome. But, that's what happens when you have your babies' birthdays 2 weeks apart. I can't believe Zoltan is already 2 years old, it feels like just yesterday he was a teensy bit of a thing who just screamed and screamed. We're so glad we didn't ask for a refund and decided to keep you!

An admission here: Terry had to work very late tonight so we're celebrating the birthday with fast food and cupcakes tomorrow. He'll never know the difference unless some day years from now he goes browsing through the old blog entries ....
Posted by Lynne at 2:12 PM No comments:

As in, automobile, not mobile phone. Our Russian drivers' licenses were only good until the end of our visas, and they expire today. They can't be good longer than our USA licenses, and of course both Terry's and my license expire this year so it isn't worth the hassle and expense to get a license for 2 months. Terry's renewed PA license arrived 2 weeks ago, so he's gotten his new Russian one and is good to go. 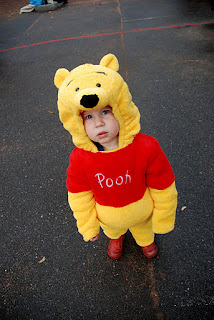 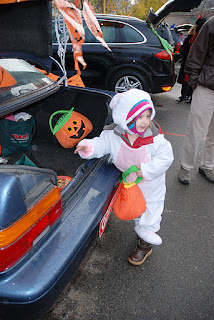 All last week I kept forgetting that this week even exists, because the kids went Trick or Treating on Friday the 21st. In my mind it's the weekend before Halloween already. The personalized pumpkin bags have a motherlode of sugar, the costumes have already become filthy and been washed (just in case they want to be Pooh and a bunny again next year. A mother can dream, right?)

Anyway, the Anglo-American school held their annual Trick or Trunk event, wherein the parents decorate their cars and kids trick or treat as though the vehicles were houses. As we were the only sedan in a field of SUVs, I think the similarity was closer than one might otherwise think. Other than the 3 (or was it 4?) rain showers in the course of the 1.5 hours of setup and the actual event, it was a good time had by all.

The camera battery was dying so we don't have photos of the after-event, when Zoltan stuffed a piece of chocolate in his mouth so big he couldn't close his mouth, drooling chocolate over Pooh's belly, all the while screaming "More Chocolate" and having a complete meltdown. 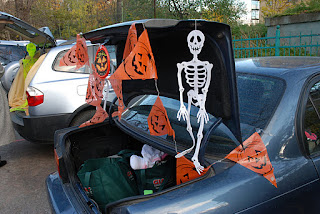 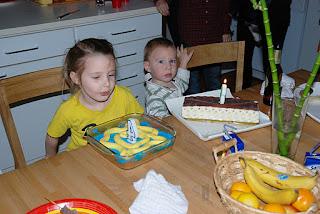 My poor deprived daughter finally got a birthday party at the ripe old age of 4. And she had to share it with Zoltan :) They are still young enough not to care, although I am sure the day is soon approaching that they demand separate celebrations. Given how attached Zoltan is to one of Alex's friends, I may be more than happy to keep him from associating with the "older girls".

We have totally rearranged our dining room to be more of a "bouncy castle room" where we can sometimes have meals with more then 1 other guest. As expected, the kids were in heaven between the bouncy castle, all our toys, the new toys from today, and the cake.

I am totally investing in a real set of icing tips - working with a Ziplock just doesn't work for me anymore. Here's an interesting tip about cake: when you make it a couple of days in advance and put it in the fridge, am overly light and fluffy cake denses right up. I was a bit shocked when I cut it and then ate it (I did cupcakes too so I had done a taste test the night I baked them.)
Posted by Lynne at 12:59 PM No comments: 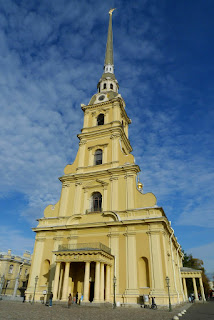 Last Saturday I organized an "orienting" walking tour with Peter's Walks. We hit the highlights, Kazan Cathedral, Church on Spilled Blood, Peter & Paul Fortress, Strelka, Winter Palace. It was, as Peter's tours always are, really interesting, informative, and a great way to see the city. I even managed to order up the most strikingly beautiful fall day EVER. When Terry's done editing the photos we'll put up a link. For now, here's the cathedral at Peter & Paul Fortress.

Tuesday Terry went to the SKA hockey game while I hosted book club. Wednesday I stayed at work late for our first Post Language Program Game Night - Russian Scrabble! If I can figure how to get the photo off my phone I'll post what our final board looked like. Our language teacher wasn't impressed, to say the least. On the other hand, even beginner Russian speakers could have participated as I think we only had 3 words of more than one syllable.

Thursday I organized a cooking demonstration with the CG's chef. Mmmmmmm. Quite frankly, in Malta the Ambassador's chef was, to my taste, a huge disappointment. Vladimir, though, can cook. I am still trying to figure a way to get over there today and grab a bowl of leftovers for my lunch.
Posted by Lynne at 9:04 PM No comments:

There are So. Many. Things I do wrong as a parent. However, tonight I felt pretty good.

Me: Alex, eat that. It's french fries, you love fries.
Alex: I don't want those fries.
Me: Then eat some cucumber.
Alex: OK
Posted by Lynne at 10:12 AM No comments:

Today my first born is 4 years old. Feels like time is flying by! She had a great day, complete with purple frosted cupcakes to bring to school, Burger King for dinner (heck yes! we got the crown) and ice cream for dessert. 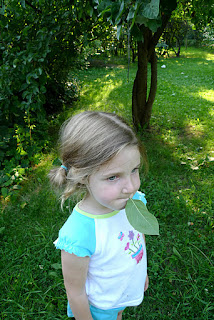 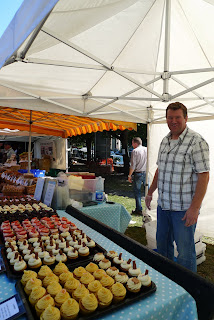 On Thursdays near the hotel a bunch of vendors set up shop and I had a chicken tikka wrap ... mmmm ..... and cupcakes for dessert. More mmmmm. 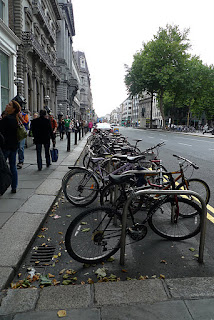 Thursday nights the shops are open late so everyone went to get their gifts for the back-homes. This is a whole lot of parking space right in the shopping area taken up by bike racks. I sure do love this city!


Friday we got out early (4pm!) so a couple of us ran to Trinity College to see the Book of Kells exhibit, which closes at 5pm. When you arrive 15 minutes before closing time, you only pay half - and the exhibit is small enough that 15 minutes was perfect. I closed my week of culinary delights with Thai takeout and packing, as I had to be up at 3am-ish for our 4am taxi.