There's a company that provides duty free goods to diplomats, the best deals are on alcohol and very occasionally we and others at the Consulate place orders with them. They are located in Denmark, I'm not really sure where the goods are located, but in any case they aren't local so after an order is placed some time passes before the delivery - which occurs at the Consulate.  We ordered 3 cases of beer. As our car still isn't accessible, a friend drove Terry home with the goods.

That's the background. The story is that the shipment sat at customs for a few days, and then the cases sat in our friend's car. Short story - all 3 cases were "refrigerated."  Our fridge at home doesn't fit 3 cases of beer if we also want any of the food and drink we need to survive to also fit inside. What to do?

We opened the window in one room and now it's the "cold room." We're also slowly (as in, whatever we can carry each day when we go to work) carrying beer into the Consulate to store in a fridge there. Finally, we had some people over Saturday night and told them we were only serving beer.

The moral of the story - don't order beer through this company in the winter.
Posted by Lynne at 9:14 AM No comments:

In Pavillion Hall of the Hermitage Museum stands the golden Peacock Clock. 95% of the time it stands dormant, but on Wednesday afternoons (usually) the Master of the Clock winds it up and it chimes the "hour". First, a spherical cage around the owl spins and bells attached to it chime. Then, the peacock fluffs out its tail feathers, displays them, then turns to show off to those standing on the other side (which is now the wall, so he's basically mooning the observers - but I am sure in Empress Catherine's court, was more open space). Finally, the cockerel on the right side starts singing/crowing. The whole performance is maybe 5 minutes.

Our Consul General had a great idea of a morale-boosting pick-me-up and suggested we organize a trip to see the Clock. When our folks contacted the Hermitage, they instead offered to have a special showing just for us at a different time and date. It was a great plan, except for the large tour group that happened to be in the room as people started gathering, and they got the bulk of the space right in front before the majority of us arrived. We got the kids to the front anyway, and those who really wanted to see the performance were able to do so.

Here's a link to more information about the clock, here's a YouTube video of its performance, and below is a clandestine photo of the clock (clandestine only because Terry hasn't edited it first, we're allowed photography there) 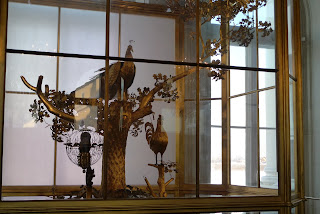 At the far end of 5th Sovietskaya, on a residential street completely deserted on a cold winter's night, stands Lapland. At least, the eponymous restaurant. Upon entering, it's a great representation of a northern cabin, all light wood, high ceilings, some pelts and antlers around the rooms. Right by our table was a children's sized table with some Ikea toys to play with. They have a tasty home brew beer and a menu full of fish, game, and arctic circle berries in the sauces (cloudberry, arctic buckthorn, lingonberry - the last of which isn't quite so northern but close).

We got the bread basket, which had some unique pairings such as "gray bread" with beetroot and something I forget, maybe celery root? The butters were also doctored and tasty, I remember one had garlic and something else, the other had mushroom. We also had an amuse bouche, which usually makes me love a restaurant on the spot. It was tasty, although the server never identified it for us there was definitely a smoked fish, cmetana, and shredded beet. yum!

Terry ordered a salad with smoked rock trout for starter, and I had smoked cheese soup with venison. They were both a bit sweet for Terry but I thought they were fabulous. If only that had been my meal!  We made the cardinal mistake of ordering the same main as it sounded soooo good on the menu - braised venison with mashed potatoes, sour pickles and lingonberry sauce. The sides were fine but the venison ... I'm not a texture person, but it was like eating venison-scented mush. I couldn't finish.

Things picked up at dessert, where I had the buckthorn-mint sorbet and Terry had cloudberry - mine was better. The cappuccinos were also perfect. We will definitely give it one more try, next time with different mains! One complaint - yes expensive restaurants are, well, expensive, but seriously, our bottle of water was 450 Rubles ($15). It's the $2 water at the grocery store. All other markups I forgave, but the water annoyed me.

It wasn't the frozen lock

We got lock de-icer (yes, this product does exist and even has what it is in helpful English) and the locks still won't work. SO now we wait for warmer weather to use our car again. Those studded snow tires, that brand new battery, just going to waste ....
Posted by Lynne at 12:17 PM No comments:

Sounds like the beginning of a joke, but the joke is on us if anything. So our car has been having troubles with the locks - the automatic locks aren't working properly so some doors don't unlock with the auto locks, some don't lock, and in general when it gets below freezing there's liquid in the driver's side door so the key can't even get in the lock all the way so we have to go to the passenger side, unlock it, then lean across the entire seat to unlock the driver's side because the passenger side auto locks don't lock OR unlock anything.

We have some concerns about the car surviving the tour. Especially as we have another 2 years here. Terry keeps saying the problems are cosmetic, the engine is solid yadda yadda

Today proved me right. The drivers' side lock was as usual nonfunctional and today the passenger side made the clicking sound but didn't raise the lock enough to actually open the door. He couldn't drive to the grocery store because he couldn't get into the car.

How thrilled are we that Okey Express opened last month about a 15 minute walk away? Can't carry as much, but can get the necessities purchased. Now we're looking into anti-freeze stuff for the lock. Exciting times.

Back in December the Consulate was offered and accepted a Master Class in ice skating taught by a former Olympic competitor and current coach of Olympic hopefuls. I "had" to go as it was my event, Terry and Alex came too for the skating. It was a great time, I had completely forgotten how much fun skating is.

This was also our test experience to see if Terry's dream of Alex going to Penn State on a hockey scholarship could ever possibly be realized. She had a great time on the ice, especially when the current skater being trained by this coach took her and led her around the ice.

So, we asked around, found a skate instructor who speaks some English, and Alex - on her 3rd lesson - skated on her own for a little bit. She is happy to go to her lessons, is dead on her skates after 1/2 hour and has a good nap later. Win-win. Today's lesson was also her first on her very own new skates - we had been renting previously and the new ones arrived this week. It's not too long before she'll be skating circles around mom & dad ....
Posted by Lynne at 1:32 PM No comments: 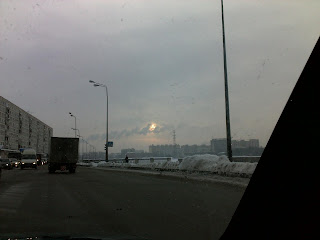 The photo isn't great, taken with my phone and all, and this is seriously delayed as it was taken on December 24, but this is the sun in the sky just before noon right around the solstice.
Posted by Lynne at 7:41 AM No comments: