Sometimes it really is the simplest things. On my way home today I had to get fruit as all we had were 2 pears or so and a handful of cherries (apparently, 5 kilos of cherries in 2 weeks and my family is nearly sated). Among other things, I got strawberries. Either the lady did a switcheroo or they weren't as good as they looked or they just didn't like sitting on the counter for an hour after getting home rather than being put directly in the fridge. In any case, they were weak. So, what to do?

Fresh cream makes almost anything taste better, so after dinner Terry gave me a bye to go to the store and buy heavy whipping cream. We threw the ingredients into the KitchenAid and gave the kids some fruit to tide them over til the cream was ready. Zoltan actually didn't love his (which he ate with cherries as we're still not sure about strawberries) but Alex .... as she licked the cream off the edge of her bowl I was cursing the moving company that never picked up our UAB from PA and thus delayed our UAB arrival home by 2 weeks, thus depriving us tonight of the good camera. I promise, though, it was priceless.
Posted by Lynne at 12:19 PM No comments:

The morning I left to take the Foreign Service Oral Exams was well-planned. I needed to leave by 9am to be on the 11:something train, where I'd get out in Baltimore and spend a few hours with a friend before heading the rest of the way to D.C., where I'd check into my hotel early enough to do a dry run to the test site, get a decent dinner, and get to bed on time.

It was HOT. 90's hot. I hadn't brought a drink or snack in the car because it was only 1.5h til the train station. We have EZPass so I breezed through the toll booths. As I pulled into the parking garage at Cira Center, I went to look for my purse to put the ticket in my wallet. And I looked some more for my purse. And under the seat. Then a swore a bunch, and pulled my phone out of my pants pocket (thank you honey for drumming into me to always have my phone on my body!) A quick call back to Terry's mom's house confirmed that yes, my purse was still there.

If Terry hadn't filled the tank the night before I would have been completely breaking down at that point, because there wasn't enough gas for a return trip before the fillup. Back onto the Schuylkill Expressway. Back into traffic so bad the A/C can't keep up because I'm not moving enough. On the phone with my friend explaining why I wasn't going to be able to see her. Talking to myself, reminding myself that the kids were healthy, we weren't in danger of losing our house or Terry's job, the marriage was strong, essentially that this was not a tragedy. AND, that night would be the first night in 4 years I spent away from all 3 members of my immediate family - heaven! The good thing about leaving all day for a 2h train ride is that if things get stalled there's still plenty of time to fulfill the urgent parts of the plan.

By the time I got to the house, I was parched and desperately needed a restroom. And a snack. Back on the road a mere 15 minutes later, I managed to make the 1:something train. Unfortunately we got held up right outside the station but still got to Baltimore by 3:00 and we were able to get ice cream and chat before I caught the D.C. train I had originally planned to take. Hotel, check. Test site reconnaissance and transit time verification, check. Dinner, check. All good.
Posted by Lynne at 12:45 PM No comments:

Begin Home Leave (yes this is out of order) 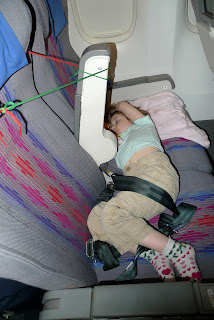 We left on May 1. As we ran to a cafe for a snack in the morning, we were reminded that it's May Day and there's parades on Nevsky and it will take forever to get to the airport. Luckily our ride came early.

The first leg seemed like it would be a terrifying taste of things to come as Zoltan didn't want to be happy (fair enough, it was time for 2nd nap and he hadn't even had nap #1 yet). Alex was a bit rough too, but not too bad. We didn't have much time in Frankfurt, just enough to get through security, immigration, and on to our gate with maybe 15 minutes to spare. Good thing we went the Snugli route rather than waiting for the stroller planeside!

We were on a 777, so it's a 2-5-2 configuration. Our seats were the bulkhead aisle and window, plus the two seats on the other side of the aisle. It was an empty plane, so the 2 seats next to us were empty. Score! Zoltan was so happy in his own seat he stayed calm and quiet during takeoff - I was surprised the flight crew let him sit alone but wasn't going to disturb the equilibrium.

We discovered that the armrest on the window seat didn't stay up so our plan of Alex sleeping there on the 2 seats was about to go out the window, until I remembered her lacing cards. I tied 2 of the laces together, used them to hold the armrest up and tied it off to the headrest. Photos to follow. The poor thing lay down and tried to sleep but just couldn't do it. Too much light. So I lay 2 blankets across the tops of the seats to create a little cave for her, and she did eventually, finally, go to sleep. We didn't hear from her again until we had to wake her for landing - it's lucky we had a reasonable flight crew because there were a few instances of turbulence and they allowed the slipshod way we draped the seatbelt around her - technically it was fastened around her but really it wasn't going to do much.

Zoltan was, as usual, the challenge. In the end Terry walked and rocked him until he fell asleep, probably a good 40-50 minutes' work. The boys sat down in the aisle seat and every 30 minutes without fail, Z stirred and T had to get up for a stroll around the plane. He did end up getting a good 4h of sleep though, and both Terry and I managed to doze a bit during the lulls. At least, the flight seemed to take less time than we thought, so we think we slept.

And, Alex did the whole thing in panties. Not an accident, even a teeny one.
Posted by Lynne at 12:44 PM No comments:

We just got back to Petersburg after a couple of long travel days. I have to be honest, today I am a champion of the rest stop vs. business class travel. My kids have a tolerance level for 2 flight legs and then all hell breaks loose. Also, when transiting in Europe we invariably have a huge (4 hours or so) wait between flights whereas with a rest stop we just get outta there and on to the hotel.

Our first leg from Allentown to D.C. was a bit rough given it was during naptime. The overnight leg was surprisingly good - Alex of course didn't sleep until we created a 2 blanket cave for her and even then she wiggled a while but eventually she did crash and was out the rest of the flight. Zoltan as usual required Terry to rock him for about 40 minutes, but unlike last time he slept about 1.5 hours straight without wakeups (last long haul he woke every 30-40 minutes and had to be rocked back to sleep) and when he transitioned to sleeping in my arms he pretty much slept the rest of the flight. Another plus was that we transited in Amsterdam rather than Germany so the flight was shorter.

We had departed DC really late but made up some time in the air and all told we were in our hotel room hitting the various beds by 10:30am - awesome! When we woke 4h later we were ready to explore the huge park out our back door and get the kids some fresh air and playtime. Of course, we stupidly put them into clean clothes and they promptly got them filthy but such is life. The hotel gets lots of high marks but their lack of an evening dining room is a black mark in my eyes. Yes they are next door to a convention center with 5 restaurants (only 2 open on Mondays) but it meant the kids had to get a bit bundled up to eat as it was chilly outside.

As usual Alex was our superstar. She went to bed right around 8pm local time and we never heard from her again until we woke her around 8am. Zoltan, though, was a typical small human. Around 11pm he woke screaming, we soothed him and probably would have gotten him back to sleep except that he peed out his diaper. So we tried letting his sleep laying on me, laying next to me in the bed, putting him in the crib with stripped sheets, etc. Terry finally suggests that maybe Z's hungry so we feed him. He manages to eat almost half a bag of dried apricots (new fave!) so maybe that was it. We also let him play for about 1/2 hour after that and then, finally, at 1:30am and with a bit of coaxing, the boy goes back to sleep. Of course, he slept through our alarm and our getting up, showering, dressing, packing etc.

Today's flight was a bit under 3h and took off around noon so we got to wake at a reasonable hour. The flight was largely uneventful except ... After happily buckling himself into the window seat - he'd been playing with the window shades - Zoltan stared out the window a bit and then fell deeply asleep. With no coaxing, cajoling, rocking or whatnot. And slept until Terry woke him to depart the plane. Yippee! But also, couldn't you have done that yesterday?

We've been blindly loyal to United for more than decade but this trip is making us take another look at KLM (the minus is that Delta is its flight partner - Atlanta is on none of our itineraries, ever) The kids' package we got from them had board-type games as well as the usual coloring and puzzle-type games. The TV/movie selection was vast and we didn't have to pull out the Archos at all - even Zoltan watched Baby Einstein happily for a bit. They had jars of baby food, which was awesome as they didn't have our requested kids' meal on their list so at least Zoltan had a bit more good (vs. snack) food.

All in all the most successful trip with the 2 kids. If only my jet lag would go away ....
Posted by Lynne at 1:50 PM No comments:

I think I have spent more time working on my e-QIP security clearance stuff - that only matters if I pass but I have to have prepared just in case - than on preparing for the Foreign Service Oral Exam itself. So, I hope it's been worth my while. I take the exam on Friday, wish me luck!
Posted by Lynne at 4:23 PM No comments: