Terry's favorite pie is rhubarb. Not rhubarb and strawberry - that's too sweet. His second favorite is apple and that is what he normally gets, because we haven't lived in places where rhubarb is particularly available. There's a family legend of very young me, and a friend, "helping" a neighbor with weeding and pulling up their entire crop. Perhaps that is the root of my earlier aversion?

In any case, when a neighbor on my local Buy Nothing Facebook page asked for help in reducing her enormous rhubarb crop,I was more than happy to start my education about what to do with this bitter fruit. 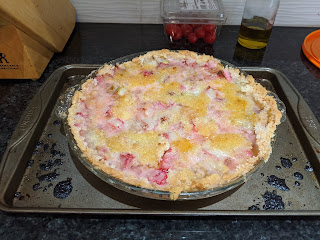 First up, of course, was the pie.It doesn't look that bad, but what you can't see is the ocean of liquid. We've been having issues with the oven and I am pretty sure it is not to temp (oven thermometer on order as there are none to be found locally. Probably has something to do with all the baking the rest of the world is just now discovering.) It didn't taste bad, once we had drained out a ridiculous volume, but it was not delicious.

Next up was rhababarkuchen from the German baking book our au pair had given me. In true German form, it was a little closer to bread than cake - only the tiniest bit sweet - but much better than the pie. The dough gave the moisture somewhere to go.

Then, the woman who had the glut of rhubarb mentioned again that she was still pretty chock-full and don't forget you can get up to three harvests from one plant. So back I go. A bunch got frozen for future experimentation, and a pound went into apple-rhubarb sauce. Yum.
Posted by Lynne at 1:37 AM No comments: