Waaay back, in 2017 (barely), Terry and the kids came to Germany for holiday. They spent almost a week in Frankfurt, getting over jet lag, celebrating Christmas, and hanging out. Then on my birthday we got on a plane and visited a country that had been on my must-visit list for a long time - Portugal.

Recognizing that we'd have a holiday and a Sunday in our first weekend in the country, we opted for an air-b-n-b in Porto for our first stop. The apartment was wonderful, one of the bigger places we've stayed, and the hostess left a bowl of fruit, Oreos and milk for us :-)

Unfortunately, the market where we planned to stock our shelves closed a few hours before we got there, so that was a downer. After our fascinating and delicious experience in Barcelona's La Boqueria, the visit was a planned high point. oops. 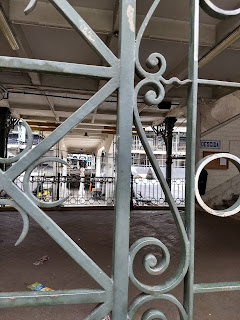 Gate closed, no vendors inside. This market is closed.

The plethora of intricately tiled homes and narrow, windy, twisty streets makes a stroll around Porto one of the best ways of spending a day, and that is exactly what we did. 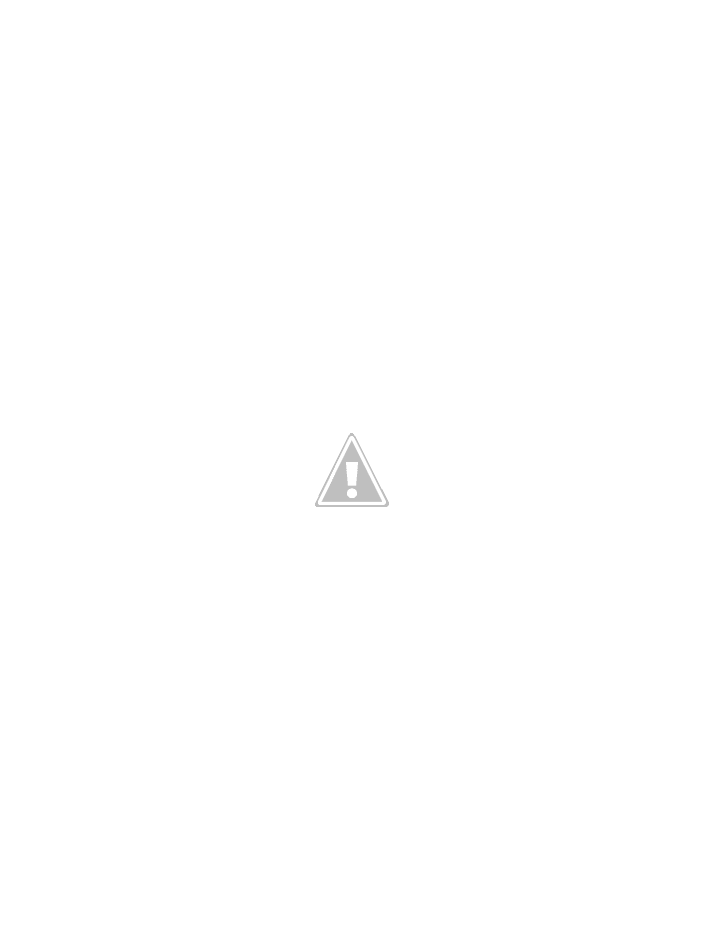 The Dom Luis bridge connects the northern side of Porto (where we stayed) with the southern side (where all the wineries are).  Below, the barges full of barrels of port. 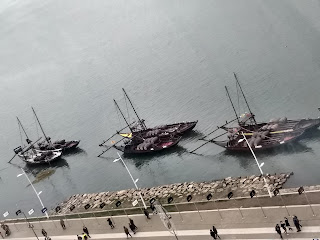 In the midst of the wandering, we found a playground for the kids to burn off some energy.  They will probably report back that the playground was their highlight of Porto. 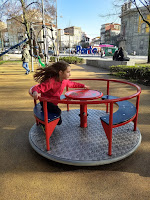 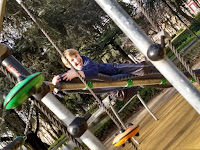 There was a huge street festival with music and entertainment for new year's eve, right around the corner from where we were staying. We told the kids if they wanted they could stay up for it, and we'd go out to to ring in the new year.  By 11:00pm they said they were ready to go home and go to bed. Turns out we could see a bit of the fireworks from one of the windows, so Terry and I still got a taste of celebration.

On New Year's Day, again, there was little open so we spend the day outdoors wandering through the city. The cable car was one of the few operational tourist happenings, and we took a ride. 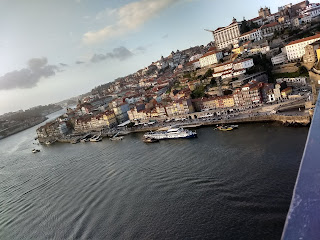 In front of the train station they even tiled the rocks!  It was fun for the kids to take a little break and get off their feet for a few. 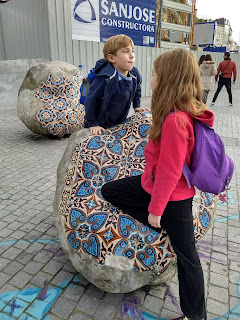 Terry doesn't like port, and the kids are kids, so in the end I didn't even taste a drop of port while in Porto. Leaving something for the next time!
Posted by Lynne at 1:09 PM No comments:

I have written about paying $10 for a small bunch of asparagus in winter in St Petersburg so that I could consume vegetables other than carrots or cabbage; my cred as a non-hater shall be considered well established.  Spargelsaison ("asparagus season") in Germany is a real thing, and it is incredible to me that people will pay 20 Euros for a serving of asparagus in a restaurant at the height of the season. In a normal restaurant. Supply vs. demand anyone?

Asparagus is tasty.  White asparagus does have a milder, more delicate flavor. No arguments here. But ...

The thing is, during the Spargelzeit ("asparagus time") it is mid-to-late-spring. There's something else going on too, something that should be the queen of the season and somehow, bewilderingly, is not. 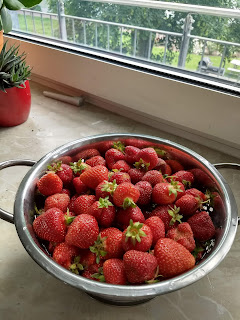 I have been tragically and pathetically lazy. Next spring will be different.

The field I visited this morning was a 10 minute drive from my apartment. You can buy a box there, or bring whatever kind of container you like and they weigh it before you start picking, so that you are only paying for the fruit. The prices were excellent too, with reduced cost the more you pick. We may go back to jam making next year!

Today was my first and only (for this season) strawberry-picking day. Sadly, many of the berries on the vine were already moldy or half-eaten by the bugs. Unfortunate for the fruit seekers, although it is a great sign of little or no pesticide use.  It took about 40 minutes to gather about 1.5 kilos of fruit. While picking, I only snacked on the ones that were so close to being bad nobody would have taken them. They tasted like honey, they were so tooth-achingly sweet.
Posted by Lynne at 5:27 AM No comments: