We bought a camper!

Not only did we start camping when we arrived here three years ago, but we have been covetously looking at campers. With nighttime temperatures below freezing in the mountains even in July,a camper greatly extends the season. It also gives us air conditioning and protection from mosquitoes during the rare - but becoming less rare - hot spells. It lets the cats come camping with us (although they may hate it and only ever do it once). We didn't want to buy a new vehicle so it had to be something what we already owned could pull, i.e., something small. But we still wanted separate beds for everyone.

So, when Terry saw the camper on kijiji (aka Canada's Craigslist) and it met all our requirements we pounced on it. Even though this is the end of camping season. Most campgrounds that don't specifically do winter camping have either closed or will close after this weekend - Canadian Thanksgiving. Snow will come at any time, it's already October. 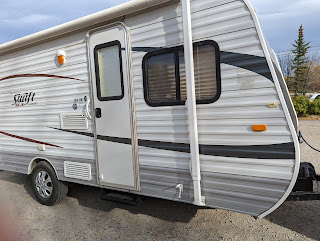