Back when we bought the cabin, a friend alerted us to a canoe going cheap. We bought it and stored it under the deck at Terry's dad's until we could get it to the cabin. Then we joined the foreign service and the canoe stayed right where it was.

While visiting this summer, we decided to finally take the canoe to the cabin. In the process of moving it to the car and then to the cabin we noticed how beautifully lightweight it was (one of the reasons we got rid of the COVID canoe was it was too heavy and bulky). We discussed Terry driving it back to Calgary. In the end he did. And this weekend, 15 years after first acquiring the ride, we put it into water!

The kids and I spent three weeks in the US this year. Starting in MA, we spent time with mom (board games, card games, Cider Hills, and for me and Alex the first of five college tours!) then with dad (another college tour, with dad as tour guide, Duck Tours, and his annual BBQ). 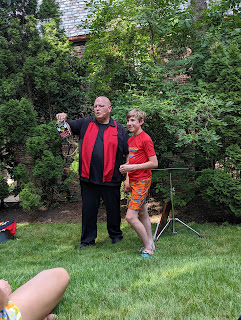 Zoltan as a volunteer for the magician who performed at dad's

We drove down to PA in time to meet Terry who had been driving from Calgary. Staying with his sister most of the time we hit the Turkey Hill Experience, laser tag (a surprising number of injuries!) another college tour, and time in and around the pool.  We even tested out our origami kayak in there.  And then again at a state park with an actual lake.  We visited folks in the Lehigh Valley and swung by the cabin on our way to the last two college tours - one being Penn State. Will Alex be blacklisted if I mention I was not too impressed with the Penn State Creamery ice cream? 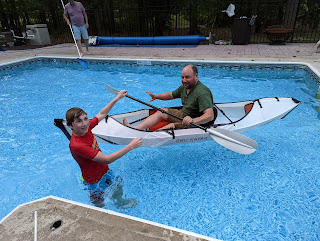 Finally swinging south, we invaded my brother's house. Terry and I had some errands at Main State and I got to catch up with a few friends there, then more catching up with friends as we checked out the water park at Cameron Run. My nephew and his girlfriend also hit town that weekend so we got to have a big festive brunch before heading to the airport where we discovered there were issues with the kids being on my ArriveCAN (as in, one wasn't and one was only sort-of) which took nearly an hour to fix and we weren't allowed to check in until it was complete. Did I start panicking? Of course I did! Also of course, nobody ever asked to see the app once we were allowed to go, but every other step from the check in to the gate was super smooth so we still had plenty of time.

Storms in our plane-change city made us nervous but I reminded myself that if storms delayed our landing, it would also delay planes departing. At touchdown our next flight still showed a departure in 20 minutes and we were 20 long gates away. I am out of shape. That it all I will say about that. The plane was in fact significantly delayed so we could have crab walked backwards - lesson learned. We once again had time to spare and then some.  Super smooth otherwise, and from landing in Calgary to being in the cab home was less than an hour. We did arrive after midnight, though, and I had work bright and early the next day!