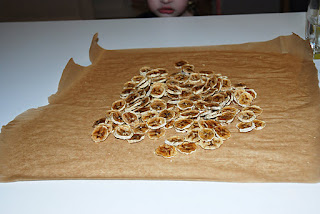 We tested out the dehydrator today with banana chips. The first bite was "hm, this is weird" and it definitely did not taste like banana chips we get in the store. BUT ... it got a bit addictive and the kids really liked it so we have a winner!

Terry will probably try apple tomorrow while I'm at the IWC Winter Bazaar (charity fundraiser)
Posted by Lynne at 11:08 AM No comments:

After looking longingly at dehydrators for months off and on, Terry finally bought one during his Metro run this morning (American holidays rock!) So now, in the winter we can have apples AND dried apples. Woo-hoo!
Posted by Lynne at 1:41 PM No comments:

Yes, we're a bit jaded after the phenomenal Budapest Zoo, but the truth is Tallinn's isn't much to report on. It is a huge amount of space with not much in there, and unfortunately the cages are not exactly spacious or comfortable. There are some signs around the zoo to the effect that depending on government funding and sponsors, the animals will get new homes as soon as they can be built, but I wonder how long those signs have been up.

The day was damp, almost drizzly, and +4C. We counted 4 other families at the zoo during our hour or so there. I really thought we'd be the only ones.
Posted by Lynne at 11:24 AM No comments:

Getting to Tallinn when you don't stop for 2h at the border doesn't seem to take any less time, of course that could be that we stopped 2x on the way to the border, then again for lunch after we crossed (there's a French Fry Store right over the border). And Zoltan still has a 6h tolerance, although this time it was slightly less than 7 hours. And he was more easily distracted.

After some fits and starts with the rental company, we got into our apartment, got the kids down (Z sleeping, A not so much) and proceeded to alternately unload the car and lay down ourselves as the night before had been a marathon of the kids waking up - Z 3 times, A 2.

Our apartment is right in Town Hall Square, and all our windows face the square. Pretty cool when you just look out the balcony to see the Tallinn Christmas Tree being unloaded from the truck and raised. Much less cool when the loud drunks start yelling and singing at 11:30pm. I think the period of silence between 2am-5:30am was due to the rain that must have fallen some time in the night.

The morning started OK if early, to the kids it was 8am when they awoke so who can blame them? Then we learn that Tallinn is so amazing and we are so cursed here. Terry's been unwell with some kind of bug all day. I'll report on the zoo separately, and with a couple of photos, but after that it was pretty much hanging out in the apartment the rest of the day, with me making some excursions to get ginger ale, wipes (we'd forgotten them!) and a few other things.

Just keep repeating, at least we're away!
Posted by Lynne at 11:17 AM No comments:

The best butter chicken in Piter

Last Saturday night Terry and I went to dinner alone for the first time since the summer, when our usual nighttime babysitter left for college. We decided to try the 3rd Indian restaurant in Piter - Tandoori. Don't confuse it with Tandoori Nights, just a few doors down on the same street.

I'll be honest, the samosas didn't impress, nor did the vegetable korma. The masala chai was promising except that they didn't boil the sugar with the tea, milk and spices (ah, they were SO CLOSE) but with a cube of sugar it was a pretty good rendition. BUT the butter chicken was fabulous. So good, in fact, that we smothered the korma in the sauce and scarfed it down. Jai Hind is still our go-to place, the food is good and best of all it's walkable ... but we will definitely make the schlep to Tandoori at least a couple of times to get that butter chicken.
Posted by Lynne at 11:43 AM No comments:

The Lomonosov Imperial Porcelain Factory is only open Tuesdays through Fridays and not on Russian holidays, so our only opportunity to tour is a non-Monday American holiday. I think we all know how rare those are! So on veteran's day we honored our men and women in uniform .... by a tour of how artists made pretty things for the czars and how they currently can make pretty things for millionaires. I assure you, the things are VERY pretty.

I didn't take a single damn picture though. Ugh! I even had the camera with me. See, there was a miscommunication and I thought the tour would be an hour, as the tour I attended 2 years ago was about that long I think ... but we got a tour of the Porcelain Museum first, which was 1.5 hours long and I was pretty sure we weren't to take photos there. The molds for many - most - original pieces are destroyed, so they recreate pieces using 3D imaging and it still can take a year or more to replicate a piece. Also interesting - apparently, Europe first learned the secrets of making porcelain from a French abbot who stole the secrets from China. Those French! That clergy!

Then it was already 12:30 and folks started getting hungry and grumpy so the factory part of the tour got cut short. We did get to see a woman get the liquid whatever-its-called and pour it into the mold to make the shape, but she was trying to be nice and show us what it looks like and didn't wait long enough for it to dry properly and ruined the little piggy :( we also saw a few made-to-order items in their various stages of completion and learn about how many different pieces can come together to make one item.

Then of course, the shopping. I ended up not buying anything because I wanted to get concurrence before spending that much on anything, but it's actually easier to get to than I remember and I will definitely be back.
Posted by Lynne at 1:16 PM No comments:

There's a Science Museum in the mall! 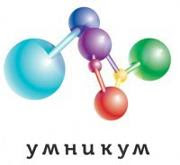 Seriously. We went today. At the Galleria Mall right by T.G.I.Fridays is a mini science museum. It kept the kids occupied for a solid 1.5h, which is the time allotted for the ticket price we chose, although I am curious how they monitor that. In any case, it was lunch time. We totally could have stayed longer.

The museum even employs a horde of assistants who explain the different exhibits. When we admitted to speaking no Russian they had the two women who spoke English hovering around us which was both comforting and disconcerting in turn.

Here's the web site: http://www.umnikum.com/
Posted by Lynne at 1:50 PM No comments: