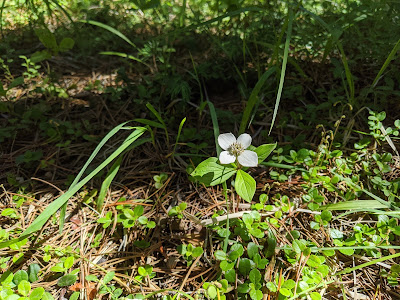 We got to the campsite around 6pm and top priority was simultaneously setting up the tents and getting the cooking started. Oh, and we had opted for the tent-only walk-in section so the site was a few minutes' walk from the car. Terry got the kids started on setting up the tents, he started getting the coals hot and the marinaded chicken onto the shashlik skewers (we had bought a portable shashlik setup either in Russia or Kazakhstan, we forget which. It's pretty awesome) while I shuttled bins and backpacks from the car to the site. Being essentially novice campers we packed both too much and too little. We have now realized that for camping the priority items are (1) tent; (2) sleeping bags; (3) a source of heat; and (4) camp chairs.  We did not have room for the camp chairs and went without the whole week. It was a definite downer. 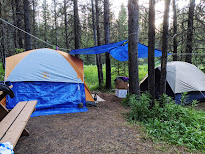 A number of rookie mistakes dogged this week's camping experience - many relating to attire and equipment. We had no idea how cold it would actually get at night. We didn't realize how cold the air mattress would get. We did not know how great the gap would be between the heat rating of the sleeping bags and the actual warmth it provided at low temperatures - although we did know enough to be skeptical so I guess that's a half point for us. Terry and I probably slept a total of 3.5 hours the first night, having a hard time falling asleep in the first place, then waking to the cold, then thinking to try one thing to get warmer, and dozing off, waking up cold, and thinking to try some other thing. At least we got all the kinks out in one night, so the standard setup every night thereafter was air mattress, with the waterproof-on-one-side picnic blanket between that and the sleeping bags. Then the extra sleeping bag (we did know to bring some extra warmth) unzipped and spread over both of us. Also, it was a summer tent (for camping in July! hahahahaha!) This means it had a lot (LOT) of mesh/venting. Yes, a rain shield, but that is for the rain. Not the wind, not the freezing-or-below temps. We sacrificed three tarps to essentially wrap the tent and create something like insulation.  Note, I also slept in the following: wool socks, flannel pj bottoms, a T shirt, long sleeved T shirt, and thin wool sweater. Some nights I also had my flannel button down and I think one night I also had my fleece jacket. Next time camping I am bringing a beanie hat. With all these modifications it was pretty cozy and we slept decently well. I have alluded to this a couple of times but it cannot be emphasized enough: during the night the temperature dropped below freezing. Inside the tent. We had a little thermometer. If someone said to me, "let's go camping in sub-zero (Celsius) temps" I would have said "hells no". And yet.

During the first night there was a point around midnight where both Terry and I needed the bathroom so we wandered up to the facilities together. On the way back he pointed up ... it was a clear night, the campsite was pitch black and in the middle of nowhere, and I have never seen so many stars.

We decided the next night we'd get the kids up to stargaze. Given that when we went to sleep around 10:30pm there was still light in the sky we decided to have bedtime as usual, and then set the alarm. We figured 11:30pm would be late enough to be sure of darkness. Yeah, this is the downside to northern latitudes in the summer. It was another clear night - the only other one of the trip so we were lucky! We were probably only out for about 20 minutes, but it was magical. We pointed at the few constellations we knew and tried to figure out which blinking bright things were the planets (if any).  Then trudged back up to bed. 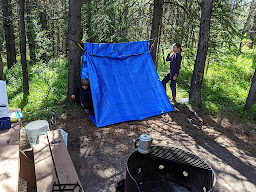 During the day in between the velvet nights, the kids read, roamed the campground, and generally hung out and relaxed. They build a little shelter/lean to out of tarps and some rope and the picnic blanket and a lot of the clothespins we brilliantly thought to bring (Terry's idea, so I can call it brilliant). Due to my chilly and horrid sleep the first night I took a couple of naps in the sun and watched prairie dogs in the field. We roasted marshmallows and ate s'mores. Terry and I sipped from adult beverages by the campfire after dinner. We had no cell phone service. This was definitely the kind of camping experience I had hoped we'd have. Although it would have been better with camp chairs. 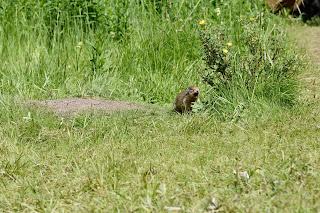