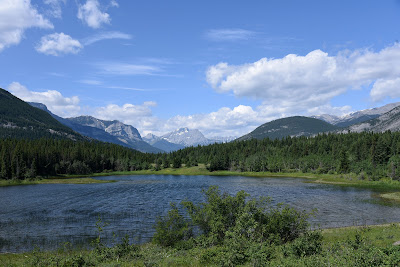 Banff needs our tourism. With the reopening of the town and the preferences for staying-in-your-own-province tourism, we were able to snag a somewhat last minute hotel reservation that included two rooms and a kitchenette. Friday was no holiday for Canadians so the town was much emptier at the start of our long weekend than it got as the weekend wore on. As we'd all recently acquired hiking clothing and shoes it was also a good opportunity to start breaking things in before our upcoming epic camping road trip. And celebrate that the kids are now my shoe size, so when they grow out of their (apparently very comfortable hiking boots) they will be MINE.

We started the trip with a short hike around Middle Lake. It was absolutely stunning with the wildflowers blooming everywhere. It was humbling and frustrating to know that there was no way to properly capture the colors and depths with camera lens, so I stared around and willed myself to commit the beauty to memory. There just happened to be a picnic table free just before the return to the parking lot, so we could soak in the view a bit longer while eating lunch. Whatever else happened, it was a great start to the trip.

Our attempt at a second short hike on the outskirts of Banff was dashed due to flooding, so we decided to try the hotel and hope we could check in early. No such luck. We let the kids hang out and read while we took a wander around the hotel neighborhood. We managed to find a little prairie dog village and enjoyed watching them run around.

Dinner was at Park Distillery, and was as yummy as we remembered. We were a bit nervous as it was the very first time we'd eaten inside a restaurant in four months. Not only was the city of Banff accommodating - the main street was closed to car traffic and open-sided tents were set up in the middle of the road for breezy, socially-distant dining but the restaurant itself, where our table was, kept things very distant. We ended up at the very front of the restaurant where the enormous, garage-door windows were open so we were essentially eating outside in the breeze.
Posted by Lynne at 8:47 PM