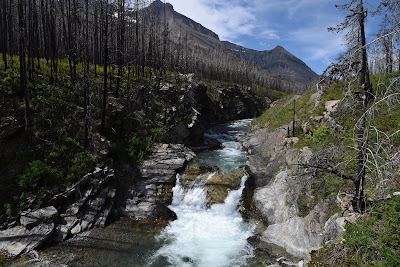 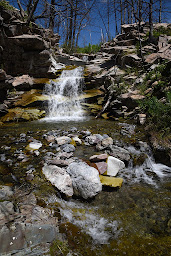 The next morning we headed out to what was supposed to be the highlight of a trip to Waterton - Red Rock Canyon. Well, our kids have an innate ability to be miserable and fight-y and whiny during "highlights" and this was no exception. The iconic part where most photos are taken was packed with people and we wandered around other parts of the canyon. "We" meaning Terry and me, and to be fair this part was lovely. Thinking to cut our losses, we headed back before lunchtime and stopped at the Copper Mine picnic area to eat lunch (picnic area = tables but no bathrooms). A little creek runs by the picnic area and ... yep. We spent hours playing in the creek and among the rocks, and enjoying the small waterfall downstream. This was probably only 3 miles from Red Rock.

When we got back to town, we wandered to a little waterfall in town that was only a few blocks away. Terry and the kids went to look for a creek to play in while I took a small hike alongside the waterfall. Dinner was the Mexican place in town that was surprisingly good.

I should also mention we saw and enjoyed watching prairie dogs once again. Having seen them in Banff and Waterton and never in Calgary, they seem to be more like "mountain dogs" or "foothill dogs" than having any actual ties to the prairie.

From Waterton we would head to our first camping adventure. We didn't want to get to the campsite before checkin time, because we're still green and thought there were people checking us in and paying attention to such things. 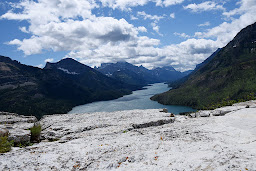 First thing in the morning we retraced the previous day's steps to some particularly scenic spots and tried for family photos. It remains to be seen if any of them came out well. At least we bribed the kids well enough that nobody would look too grumpy in the shots. We tackled the Bear Hump mountain next. It was less elevation than Tunnel Mountain but attained in a fraction of the time, so I was still huffing and puffing and swearing to start running when we got back to Calgary. It was a good trek and relatively short as hikes go. Stunning views from the top and a vicious wind. 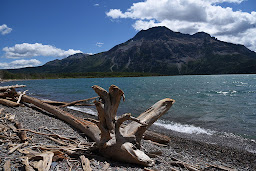 As we still had some time after this hike, we checked out Driftwood Beach on our way out of town. Once again, what we thought would be a quick stop entranced the children. Alex decided to put her outdoor camp knowledge from last year to good use and started constructing a lean-to with the driftwood - there were already several along the beach, but she wanted her own. Terry and I looked for the perfect walking stick for each family member until we saw the sign that warned against taking any of the wood from the beach. Darn. 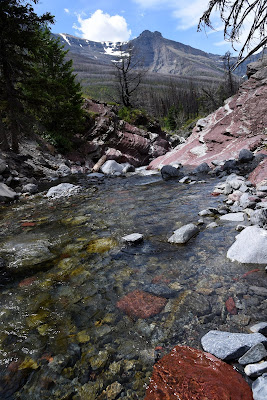