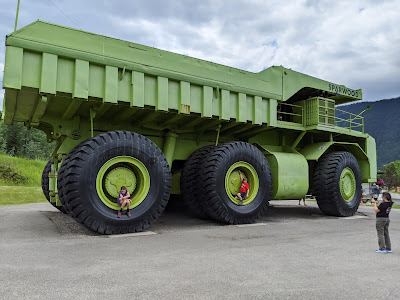 We decided not to cancel our hotel reservation in Fernie, British Columbia, when we modified our trip. That was pretty dumb, in hindsight, as it was a lot of backtracking and driving to get there and from there to the next place. We spent one night there. On the other hand,it was informative and we definitely want to go back for a full weekend or more. We decided to take the scenic route driving, so stayed on route 40 rather than the less gravelly and slightly smoother and faster route 22. That was eye-opening and useful because the advice on Crown land camping is often "drive along route 40 and find a good looking spot". We saw a ton of campers and tents relatively close off the road, or further back we'd catch glimpses through a break in trees. Actually seeing where people set up and what the setup looked like was helpful in planning if we ever want to try this ourselves. Crown land camping is basically just total backcountry, go into the woods and find somewhere to pitch a tent camping. Called crown land because it's government land, technically still held by the Crown. I think you need a permit to do this and finding a spot can be tricky - apparently the best spots are way back from the road and some get overrun and you have to find somewhere else. It also appears to be mostly folks with campers, rather than tenters like us.

The hotel in Fernie had an indoor pool with waterslide and when we first got there (about 20 minutes after checkin) the four of us were the only people in the area. I left them to go shower - the first one in 3 days - and apparently more people did come later. When we left later to go to dinner it was pretty full, definitely past the 12 person capacity the hotel requested. There is practically no COVID in BC so often we were the only ones in masks anywhere we went wearing one.

Our neighbor is either from Fernie, or lived there for some portion of his life, and had a list of recommendations we could never get to in the span of time we planned to be there. We dined at a recommended restaurant, then started a little hike but didn't get far, and ended up with ice cream. A number of benches outside various restaurants are actually old ski lift chairs, a testament to the fact that Fernie is apparently more a skiing hub than a summertime destination. Next day we walked around the main street area - 2nd Ave - bought some chocolate - and hit the road. In the nearby town of Sparwood is "the largest truck in the world" and we stopped for photos. Also because it was in the same parking lot as our bank and we needed cash for buying firewood at campsites.
Posted by Lynne at 10:00 AM