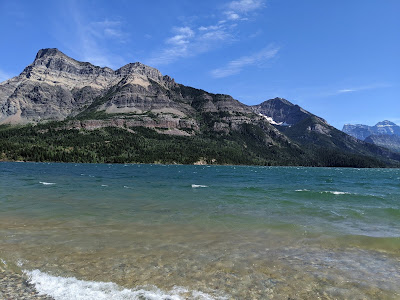 Our original plan for a July vacation involved spending a few days in Waterton, then crossing the border into Glacier National Park and making a loop through British Columbia on our way home. As we didn't want to (1) head home immediately and (2) quarantine for 15 days after spending no more than 4 days in the USA, we had to change our plans.

Days 1 and 2 were in a hotel in Waterton. It is a national park like Banff and Jasper, but nobody outside Alberta seems to know about it. I could call that fact a big loss, but then it means it is less crowded when I want to go so maybe that isn't a bad thing? 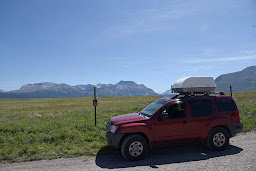 Our first morning started off terribly. We needed stuff for staying in hotels and stuff for camping. And we have never camped with the kids. In the first packing attempt we didn't even come close to getting everything into the car. We had to rethink, rearrange, and employ the rooftop carrier our friends loaned us for the cross-country trip. Yes, we spent one week with the same amount of stuff we had for a week of driving plus a month or so of living in Calgary.

With that hiccup and leaving hours later than planned, the day could have gone south quickly. But somehow we all kept our good humor. Our stop at Tim Horton's for treats that we ate, after our sandwiches, sitting on a grassy area in the warm-but-not-hot sunshine next to the parking lot of Timmy's probably helped the good mood. 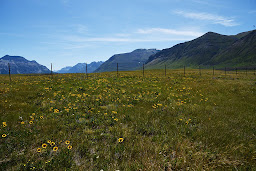 We had planned to drive through the Bison Paddock drive-through on our way into town. When we got there it turned out there were no bison to be seen this season, or at least at this time. Disappointed, we went to the end of the little dirt road to turn around and found a little hiking area that went past a pond and tons of wildflowers. We really hit the jackpot with the timing of this trip, as so many beautiful wildflowers were around everywhere we went (although not quite in sufficient numbers to show up well in photos).

When we got to the hotel the room wasn't quite ready  so we decided to wander around the town - it's cute and entirely walkable. We ended up at the rocky beach where the kids proceeded to entertain themselves for something more than an hour. The rocks were stunning, a rainbow of colors. They were a decent facsimile of the colorful rocks we would have seen at Macdonald Lake in Montana if we had been able to get to Glacier.

After checkin it was time to think about dinner. Of the recommended places two were closed, one didn't allow minors, and with hot dogs listed twice on our camping rotation someone vetoed the hot dog place even though he could have gotten their apparently tasty falafel, called something like the not-dog. Dinner was meh, the ice cream afterwards was the best of the trip.
Posted by Lynne at 10:00 AM