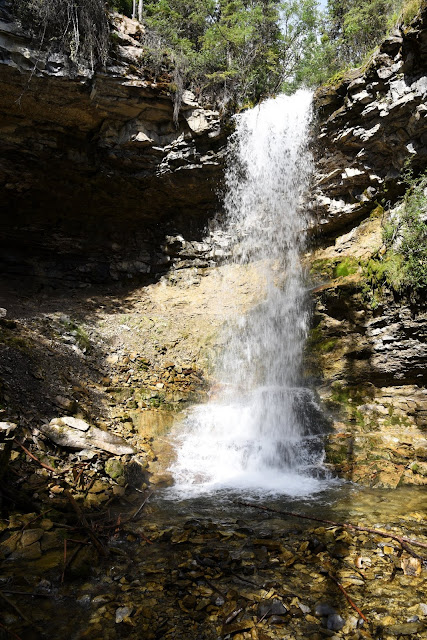 One of our summer plans was to revisit the frozen waterfalls we hiked this winter now that they are flowing. We finally got around to visiting Troll Falls this weekend.

In the winter, the little one complained incessantly about the bulky winter gear and being so tired he needed to stop and "snowbank" practically every 10 meters. In the summer, it was mosquitoes and the heat that absorbed his negative energy. On the flip side, the "hike" took the practically no time at all I was pretty sure was its true nature.

Something unhappy must have happened in the last six months, because there were a ton of downed trees on the sides of the trail and clogging the stream (river?) There were bridges that had not been there in February as well as a barrier between the lookout area and the falls itself. Signs warning of rock falls and the closure of the route to the upper falls completed the sense of doom and gloom.

Acknowledging that it was likely quite foolhardy at lunchtime on the Saturday of a long weekend, on the way home we decided to try checking out Barrier Lake.  Silly us, there was no way to get to the lake with anything less than a mile's walk. Meh. We turned out attention to any picnic area where we could eat our lunch outside the car, and thus stumbled onto the Widowmaker Trail. 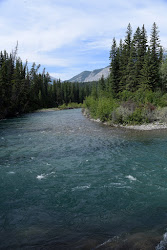 After a quick lunch we decided to find the source of rushing water we heard from the other side of the trees. And there it was, a stunningly blue patch of river with small whitewater peaks and a few little "coves" of calm water. It made me really regret not having acted on my impulse to leave a few beach towels in the car through the summer, although Zoltan was happy to have brought his water shoes. Glacially cold, but refreshing in the relentless sunshine. We merely dipped our feet and watched the water flow, while also keeping an eye on the group getting rafts prepared to launch (Zoltan wanted to watch the rafts launch, but they seemed in no hurry so we eventually gave up). 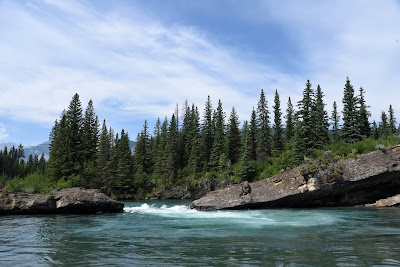