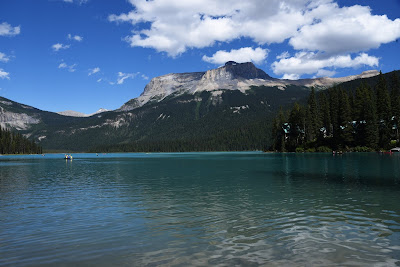 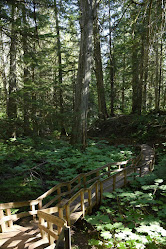 We had lots of plans for the road between Revelstoke and Lake Louise. First stop, the Giant Cedars Boardwalk. It is technically an easy Revelstoke adventure, but it is also half an hour away and on the road we needed to take anyway. I'm glad we went, and the age of the massive cedars was impressive, but on the whole i think it could have been cut if we were short on time.

Then to the Northern Lights Wolf Sanctuary. They take in wolves that were previously in performances, or zoos that closed, and generally have not been in the wild and wouldn't survive in the wild. We took the "tour", which is really a staff member talking about wolves generally and these wolves in particular. All the wolves were napping, although a few were at least doing so within our eyesight.  We had seen from recent reviews that a wolf puppy had arrived and we could see vague, tiny patches of brown way in the back. The talk was OK and I didn't mind giving the place our admission fees, but the real magic happened afterwards. It was feeding time. So we stuck around.

They fed the wolves in the back cage first, so the ones in the front cage were totally going bonkers - they could hear and smell what was going on. The two adult wolves had been moved to an adjoining enclosure to the one where the puppy, now up and active, was running back and forth alongside the adults across the fence.  The puppy was very new to eating proper food, and the sanctuary wanted to give her a bit of time with the lunch before letting the adults back in. It was comedic when the owner threw the rib cage int the pen.  The puppy was clearly frightened of it, darting towards then backwards. She finally grabbed a tiny bite and ran off with it. This occurred a number of additional times, until she finally understood the thing was dead and would not hurt her. After she had a bit of a snack, the adults were let in. 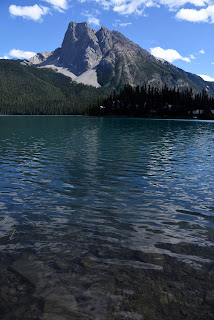 When we had our fill of wolves, we had lunch at one of the facility's picnic tables and continued our eastern journey. An hour later was our last stop before the final destination- Emerald Lake in Yoho.  We had heard the rave reviews of the stunningly beautiful lake. And yes, its colors were so dramatic Alex insisted the water was dyed. But it was so incredibly packed with other human beings. Let's just say that social distancing was not possible. We started walking around the lake and after about 5 minutes turned around. It was just too crowded.

We had an inkling that we might not be interested in summertime hiking in the most popular spots and this confirmed it for us. We did capture a few breathtaking photos of the lake, and then got back in the car for the last leg.