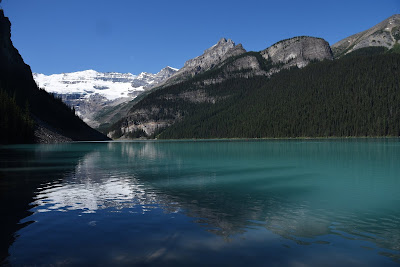 The day was absolutely not over yet! Due to our several stops, we managed to get to the hotel just a bit over check-in time, which meant we could go straight to our room. The hotel is old and kind of dumpy, but the room was BIG and the hotel was basically right on Lake Louise (we did feel a bit smug as we drove right into the hotel parking lot while others on the same road were turned back due to the full public parking lot).  The Fairmont hotel next door has a couple of somewhat more casual dining options, so we put on nicer clothes and wandered over in the blazing (80 degree) sun. Things feel a lot hotter here, I am going to blame altitude. 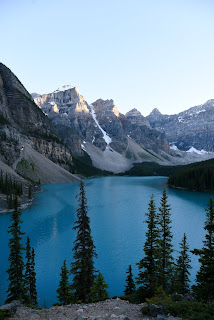 I bear a massive grudge right now against the Fairmont, because when I called to see about reservations the automated line said they only took walk-ins for those who weren't hotel guests. But at every possible entrance to the Fairmont grounds, there was a sign saying only hotel guests were permitted. By the time we got back to our hotel we were very hot, very hungry, and very grumpy. At check-in we had been told the hotel restaurant was booked but we could try walking in. The server who waited on us was very surprised when we told her that. There was no problem with the seating. The dinner was surprisingly delicious.

Feeling much better, we decided to see if Moraine Lake was less hectic in the evening. It was around 8pm or so, still an hour before sunset, when we headed out.  It was an awful attractive nuisance, all those fun-to-climb looking rocks and all the signs saying please don't climb on the rocks because of the fragile plant ecosystems living on and among them. We hung out for a bit, hoping for sunset colors that never materialized. By the time we got back to the hotel it was way past the kids' bedtime, but Terry was feeling fired up and after the kids got to bed he went outside for his first taste of nighttime photography. 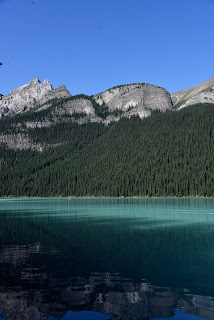 We had planned some hiking for the next morning but hadn't decided what. I really wanted to try the Lake Agnes or Plains of Six Glaciers tea house hikes, but after our Emerald Lake experience we realized we did not want to venture towards touristy places in high season. We instead chose a short hike that roughly paralleled the lake to a beautiful viewpoint. It was a nice little walk in the woods. But it was the return trip that really sparked the joy. Rather than return down the trail we took up, we made it a loop by taking a different path down to the lakeshore. On the way down we hit a rockpile the kids could climb on - which was the highlight. Although Alex wants to be very clear that she did not enjoy any minute of the hike.

After a return to the hotel and packing up, it was time to head home. 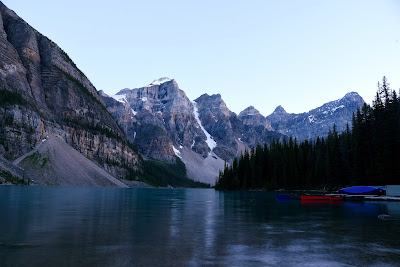