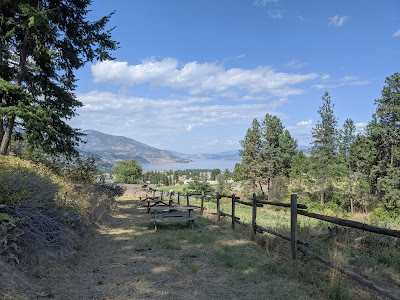 That's British Columbia. See, the week before our vacation Terry was supposed to TDY to Vancouver. This of course means we were all supposed to be in Vancouver for a week. Then we planned to spend a week meandering around B.C. on our way home. Vancouver is allegedly 11 or so driving hours away.

Before it was even officially canned (only a few weeks ago, because of course) we decided to revamp. So on Monday we hauled ourselves to Kelowna, the beach-y area in Okanagan that was also about as far as we were comfortable driving in one day. Funny story, we stopped at this random rest area for lunch and it turns out to be right where the very last spike of the Canadian railroad was laid and there's a whole  monument. It was cool. We would not have made a special stop for it, but stumbling on things like this are what make epic road trips so epic.

We got to Kelowna right in time to check in, then went to check out the town. At the City Park we let the kids play in the water up to their knees, as we hadn't brought bathing suits or towels. And we were heading straight to dinner afterward. After dinner we tried Moo Lix, the ice creamery recommended by the waitress at the restaurant where we had dinner. My lavender honey ice cream was unique and really tasty, but the homemade waffle cone was too thick and bland. 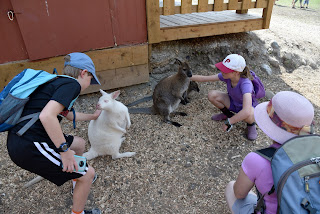 First stop next day was the kangaroo farm. Folks at work had recommended that and we thought it looked cool but were totally unprepared for how much we would actually enjoy it. In one pen were animals that did not like to be touched, and another pen had the animals that could be pet.  We also got to watch the antics of the parrots, parakeets and cockatoos and learned that if Zoltan were reincarnated as an animal he'd choose to be a macaw. There was a capybara and her baby that we were not allowed to pet, with a farm employee hanging around to make sure nobody got too close. She was holding a joey who looked to  be too big for the pouch anymore, but apparently wasn't, so we all got to get close to other cuteness. She said she was giving the mom a break.

We promised the kids we could spend the afternoon at the beach. There is a playground right by the shoreline at Boyce-Gyro Beach and a zipline that drops you into the water. We were shocked that the kids never tried the zipline, but they said the line was always too long so I guess they do take after their parents a bit. There were also rentals of various watercraft, and Terry and the kids each got on a solo kayak. The kids loved that part, which was good as we had booked a kayak trip on our next stop.

In Alberta, we all know the best produce comes from B.C. and especially Okanagan county. So the next morning we got up and went to the farmers market for local fruit. They also had linden honey, which we had eaten tons of in Russia but always creamed, and this was liquid, and I was fascinated. It is indeed very delicious. Then it was time for the kids to play at the hotel pool. Pool time could have been longer, but we got the call that we were able to get a reservation at the Red Fox Club, restaurant to the Indigenous World Winery. Lunch was sublime, the view was lovely (outdoor seating always prime in the COVID era) and we left feeling very stuffed and happy. We (well, I, because Terry was driving and doesn't really care much for wine anyway) ended up trying only one winery - Rollingdale. It is super small, and the gentleman who handled the tasting was super knowledgeable and had a good sense of humor. I don't know what they do to their wined but it was the most unique experience I have ever had, and I bought wines made from grapes I've never liked before. I absolutely want to go back again.

Our hotel was across the street from a German deli/butcher that got great reviews. Knowing that we'd need to have some meals on the go and not wanting them all to come from A&W, we had brought some sandwich fixings, Terry's homemade sourdough bread, and a cooler on our trip. We decided this was a great opportunity to restock. And it was.

Next day was pretty much get up, pack up, and head to the next stop. 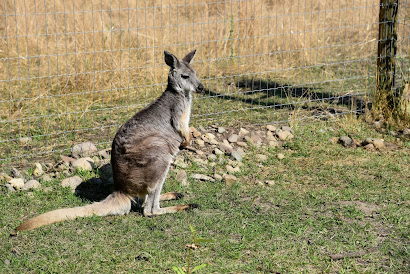