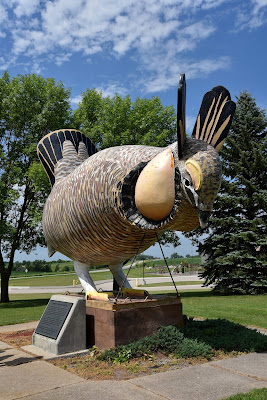 We drove through Minnesota and ended up in North Dakota.  We had planned a few more "World's Largest" stops along the road but the first time we actually stopped was the World's Largest Booming Prairie Chicken. Apparently, during mating season the males fluff out a bunch of feathers and also puff out these sacs under their necks that are bright orange. Here's a sample video, because it is too awesome not to spread the word about this phenomenon.

We looked into somewhere to eat nearby and 0.3 miles down the road was a barbecue place that only opened a few months ago. The smoked meats were absolutely delicious, the barbecue sauces didn't have as much heat as we would have preferred, although the kids were thrilled with the honey-sweetened option.

Back on the road to just-before Fargo. We planned to stop at the Heritage Hjemkomst Interpretive Center from the moment Atlas Obscura let us know of the replica Viking ship located there that actually sailed from the USA to Norway back in the 1980s. The story of the man who built this ship practically in his shed and the crew that sailed it from Duluth through the lakes and rivers of the USA til it reached New York and ocean is pretty spectacular.

We didn't think we cared until we got to the Center, but there is also a replica of a Norwegian stave church on the grounds. It was built by a local scientist who was also a woodcarver, apparently as a project to keep him busy in retirement. Apparently the Scandanavians were not so quick to adopt Christianity and some elements of the indigenous culture were incorporated into the designs of, for example, churches. The dragon heads that adorn the corners are a first clue. Our tour guide explained that even the pattern of the shingles on the roof was meant to evoke dragon scales.

The kids were thoroughly unimpressed with the church. This was partly because they were aching to get back to the main part of the Center, where a table held all kinds of Viking armament and armor with a strict sign not to actually hit people with it. They mostly complied.

Then we drove three minutes across a bridge and were in North Dakota!
Posted by Terry at 8:00 AM