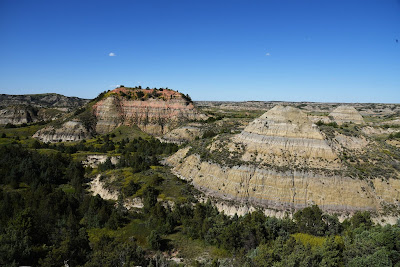 We had a somewhat longer driving day to get to the North Dakota hotel we had chosen along the route ... chosen because of the water slides in the hotel pool. They did not disappoint. We chose fast food for dinner because of it being, well, fast, and the kids got an hour to play before bed. The next day they dutifully chowed through their breakfast in order to get into the pool for a short while again in the morning before checkout.

Jamestown is a big buffalo place, meaning it is home of the world's largest buffalo!  It's set just on the far end of the Frontier Village, which is a fun depiction of a main street back in frontier days. The kids enjoyed hanging out in the jail and seeing what the post office used to look like.

So far as we knew, there were no tourist sights, things to see, reasons to stop along the road to the next hotel. We drive for a few hours. Then, we see signs for Theodore Roosevelt National Park in two miles. What?? Right then, Terry says he needs to stop and stretch his legs. 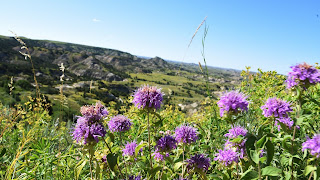 We pull off into the Painted Canyon Visitor's Center.  Oh. My. Goodness. The vastness, rugged terrain, and difficulty of adequately capturing it on film reminded me of the Grand Canyon. We decide to take the (described as) half hour hike into the canyon. The kids whine they are hot and tired. Then they see a couple that had passed us on the trail not ten minutes before were near the top of one of the peaks in the canyon and they are energized. It was a fun hike up, much more challenging getting down the thing because some of the soil was a bit pebbly so we weren't as sure of our footing. Heading back out of the canyon was a bit more challenging than what we are used to, because we are all in horrible shape and moving probably faster than we really needed to.

We've all heard of Yellowstone, Yosemite and Glacier. How had we never heard of TR National Park? He is practically the reason we have any national parks at all!
Posted by Lynne at 8:00 AM