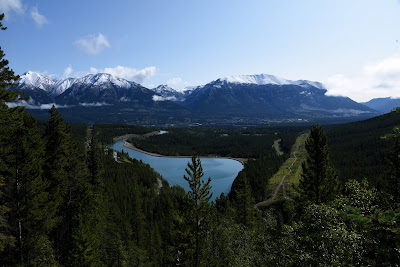 With the weather and everyone's health in line, we rushed out the door last weekend to check out a reportedly easy hike a bit over an hour away.

Our kids have seen far too many amazing things in their short lives and are subsequently painfully jaded. For Alex I could blame it on tween-ness but Zoltan has no excuse. They did not care about the spectacular mountains. Or beautiful view. Or the waterfall. Or the fresh, crisp air. Speaking of which, it is August and it took nearly half the hike for me to shed my jacket and my long sleeved T-shirt. Needless to say Terry is in absolute hog heaven. 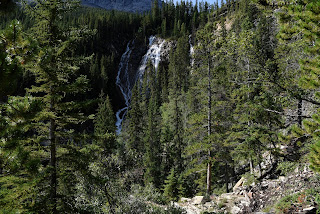 In all fairness, they did did eventually stop whining about wanting to go home.

The guide book calls Canmore "Alberta's Aspen" but about a million times smaller.We headed into town after the hike to grab lunch and to wander around. The kids did an amazing job not whining in the candy store, and were happy to use their allowance to get some treats to snack on during the ride home.
Posted by Lynne at 4:57 PM