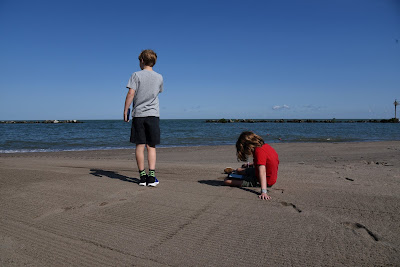 In the morning we indulged the kids - and ourselves - and took half an hour on the beach along Lake Erie before hitting the road. Zoltan got his sneakers soaked so he got to ride barefoot. 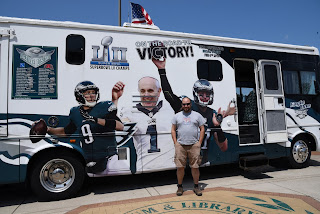 From Ohio we went through Indiana where we stopped in Elkhart for the day's activity: RV/MH Museum and Hall of Fame. Yep, we toured a whole bunch of recreational vehicles and checked out a manufactured home (lots of folks do, as we initially did, get the MH wrong). There was one donated by a Scranton family who had been using it through the generations over 40 years. There were several from the earliest days, hitched up to Model T Fords. Alex has gotten it into her head to design a 12 foot trailer for a family of 5 that has to include both kitchen and bathroom, so she got lots of good ideas and a sense of how much space things actually take. The family highlight: the Eagles mobile. I'm pretty sure this is the exact vehicle referenced in a recent podcast we listened to... In fact I think Terry heard it only the day before.

We ended the day in Schaumburg (outside Chicago). There, Terry proved what an amazing father he is by acquiescing to Chicago deep dish pizza for dinner (kids and I had the pizza, he got a pasta dish. He can agree to the restaurant but he certainly won't stray from New York thin crust except under duress).
Posted by Lynne at 8:00 AM