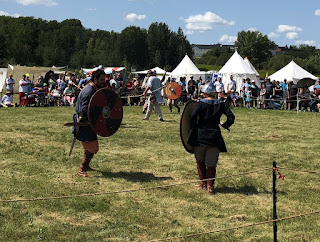 We really do spend most of our time at work (Terry) or looking for housing (Lynne) but sometimes there's nothing scheduled and it's the weekend so we have been trying to get out and experience Calgary. Or stuff near Calgary. About an hour away is an annual event called the Days of Yore. Basically, there are different groups of historical reenactors - Vikings, Medieval, WWI, WWII and such, and they gather together for a full day of displays, mock warfare, and of course tents of things to buy.

Alex was particularly interested in the older stuff - people using swords rather than guns. The re-enactors were pretty serious and skilled, we had the chance to feel the armor and weaponry before the event and it was all pretty genuine. There was a bit of comic relief when a Medieval knight decided to join in with the Viking duels. Zoltan was thrilled by the military tactics, vehicles and of course guns. But there were other things as well. 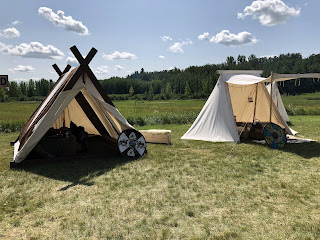 One tent held a series of pelts, all the kids of animals found in the Canadian wilderness and the kinds of things the old trappers would sell. Foxes are a lot longer than they seem when they don't have any bones or guts. One particularly interesting exhibit was an amazingly well preserved top hat in its original case, from probably 100 or more years ago. Apparently the wealthiest men in London prized beaver pelts for these hats because they were warm and very waterproof. The hat he showed us was beautiful.


We also tried the very "traditional" taco-in-a-bag for the first time. Is this a common thing in the world and we have been overly sheltered?

After a few hours in the blazing sun we were absolutely beat and decided to curtail the planned second stop (more on that when we do finally get there). One thing we have had a hard time really digesting is that the temperature always feels 10-20 degrees Fahrenheit warmer than it really is. Too many 60-something days I have made the kids put on pants rather than shorts and later apologized. I have heard a similar phenomenon occurs in the winter, where -20 might feel more like -10. I'm ready for that!
Posted by Lynne at 8:00 AM