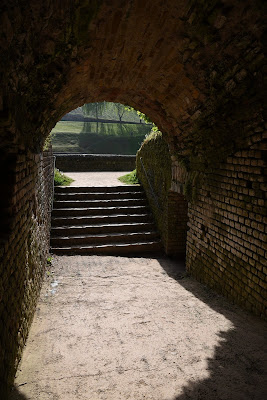 Trier was a surprise hit on the epic road trip, and the ampitheater was a surprise hit in Trier. I'm not sure what I was expecting, but it was not this - the entire space is incredibly well preserved. To the point where it takes almost no imagination at all to recall where the citizens would enter and sit, where the gladiators, animals or slaves would be held while they awaited their turns. The kids had a blast in the center of the arena pretending to fight to the death, or pretending to be the emperor calling for the fight to begin, or sparing a life.

After the ampitheater we headed to the Roman Museum. It boasts the largest collection of gold Roman coins in ... not sure. Germany? Europe? the world? It also has a local mummified child, numerous artifacts from when Trier was an enormous, important Roman outpost. It was cool, but we kept being yelled at by museum security/docent folks for leaning on glass cases. Or touching them.

Our last stop on our way back to Frankfurt for the night was Idar-Oberstein. Our friend is a jeweler and had learned about the gem mines in Idar-Oberstein while studying for her degree. This was another sight we would never have thought to put on our list but was an enormous hit. 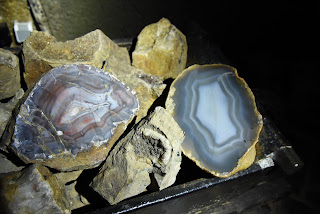 Amazingly, we arrived at the site with 10 minutes to spare before the next tour was departing. We got helmeted and our audio guides and headed down into the coolness. We learned about the gems that were mined there, how they were mined, and saw lots of examples of unmined gems peeking out of the more boring rock.  After the mine, just a bit down the road, is the mill where the gems were cut and polished. There was an interesting interaction when the tour started, as a woman sounded very angry when she told us there wasn't an interpreter (we never asked for one, or made any comment at all about the German capabilities of our group). Then the same woman rallied a volunteer (who seemed to have been the woman's granddaughter, or niece, or someone who was related but not her own child) to to an ad hoc interpretation. As the terminology relating to century old gem processing practices is relatively uncommon, she was often searching for words that the entire group participated in helping her find.  I decided in hindsight that the original woman wasn't angry at all, that was just how she spoke.