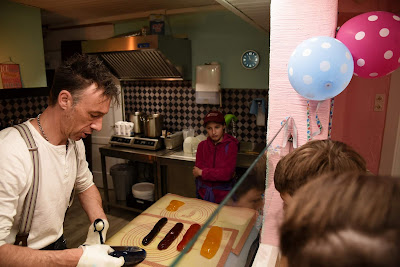 We knew we wanted to walk the walls of Rothenburg as we hadn't had a chance to do that on our previous trip. It was absolutely fantastic. At one point in the wall there is an enormous random room that takes you to another room full of cannons. There were no other souls around that part of the wall when we were there, and it felt like a secret. We also had fun reading the blocks engraved with information about people who had donated to rebuilding the wall, including one family from Dallas, PA!

We then popped into a candy store where the proprietor had just begun a demonstration of how he made the candy, narrating what he was doing as he did it. He clearly spoke a few languages and when we walked in and he heard us talking he switched to English. It was a little funny because the one other group there spoke Russian, so one of the people in that group was translating between English and Russian for the rest of them.

The store had opened pretty recently and they make hard candy and lollypops. There are a number of packages that are mixed with several flavors of hard candy, the Opa's (grandfather) Mix has rhubarb, apple and coffee. After showing how he colored and stretched the candy, and how he made lollypops, he let each of the children come up and make their own pop. That was a definite highlight.

After the candy store it was time for all the fun to come to an end. We did have to introduce our friends to the Rothenburg delicacy Shneeballs, but we got them to go and brought them back with us. Packed up and headed back to Frankfurt. Our friends left the next day, Terry left the day after that.

Our last epic German road trip, and the most epic one at that.