Felsenmeer means in German "Sea of Rocks."  Oh, yes. About an hour south of Frankfurt is an amazing boulder field, apparently formed by a volcanic experience a very long time ago. You can wander up a path alongside the boulder field, or venture through the field itself. Someone on Trip Advisor mentioned that if you go fast you can get up the field in half an hour. I can't even imagine the person who could do that. It took us closer to 1.5 hours with several important rest stops along the way. My physical fitness is not what it once was. 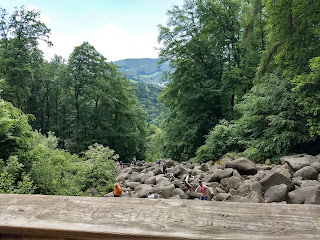 You can see how big the boulders are compared to the people on them. This bridge is about halfway up. 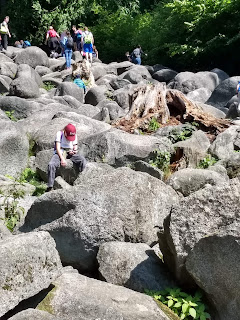 At the top there was a restaurant where we provisioned, then at a little kiosk on the way back down we fortified (with cake). Tip: bienenstrich is a honey cake with a layer of cream in the middle and now I need to eat a whole lot of it in the little time we have left before leaving Germany.

I had figured on a couple of hours of climbing, but we ended up being out most of the day. We bouldered up, but ended up wandering through the woods on the path down. A few times I was convinced we had gotten horribly lost but somehow we did make it to the parking lot. As it turns out we were very lucky in getting there so early (didn't feel early but it was before lunch) because it was a complete zoo by the time we left around 3:30pm.
Posted by Lynne at 3:55 PM