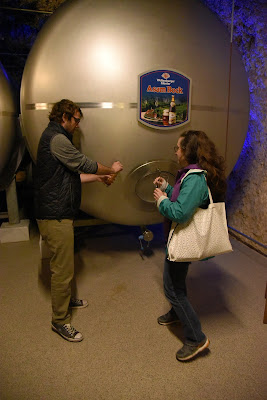 The oldest monastic brewery in the world is essentially right between Garmisch and Rothenburg, so it was a perfect lunch stop. The location of the Abbey is beautiful, right on a small stream (the Danube) with woods and overlooks. We lamented not having enough time to try out the hiking paths identified in the brochure we got at the visitor's information center. Terry taught the kids to skip stones and they whiled away a chunk of time improving their performance. We could have spent half the day just on the banks.
The Abbey's web site is very confusing - pretty par for the course in Germany - so we had understood that there were no brewery tours although one could book a tour of the Abbey itself. Oh, how wrong we were. When we went into the visitor information center/museum to buy our tickets for the exhibit, the lady asked if we wanted to go on the tour. What, what?  Absolutely!

The fee for the museum is included in the fee for the tour, so she went through a process of refunding our money then charging the new rate. The tour guide did speak English and would summarize what he was saying every so often. He used pretty basic language and spoke clearly so I was able to add some of the color he'd included in the German but had left out of the summaries (like how women were the brewers for most of history, and some of the unusual ingredients that had been used in beer over the years in Germany before the Purity Laws were introduced).

A highlight of the tour was a tasting directly from the cellaring cask. When it was over, time for lunch!

Sated, we hit the road toward our last stop in the epic road trip - Rothenburg. We enjoyed our short time there during December break the kids insisted we add it to this road trip, and Terry and I were only delighted to agree. We arrived in town early enough to get settled in the guesthouse, wander the streets a bit, grab a quick dinner and make our way to the town square for the Night Watchman tour. The crowd was larger than I would have expected for a somewhat random night but - happily - significantly smaller than it had been during December. I don't know if he mixes up his material or if we hadn't caught or hadn't remembered much of the previous tour, because I would say I remembered about half of what he told us on this tour. It was, again, wonderful. We even decided to buy his DVD at the end. 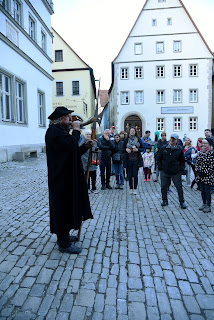