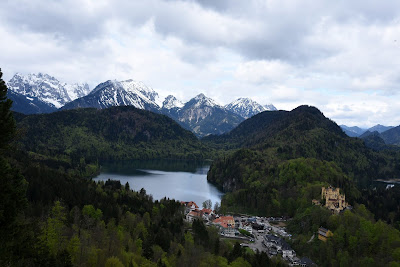 Day 8 was mostly the long, long, drive from Freiburg to Munich. When we got to Munich it was chilly and a little bit raining, so we took no pictures. We wandered around the food vendors and got some treats (pickled things!) and managed to catch the Glockenspeil. We hadn't remembered it from our trip to Munich 17 or so years ago (imagine that). Our attention spans have definitely shortened, especially in the rain, but we did catch the "surprise" ending.

The next day we journeyed to the night's final destination - mountains - via Neuschwanstein castle.  I am very glad that we made the stop, and very glad we didn't bother with the tour of the inside of the castle. To be honest, we took more photos of the view of the mountains than the castle itself. It was a warm day and a nice hike from the parking lot to the castle itself.

Then back in the car and down to the Eibsee. It was cloudy but we still decided to head up to the Zugspitze. When we got up, we went outside to see just how bad the visibility was. We took a joke family photo that looked like we were standing in front of a white sheet, although I will swear on my honor there are mountains behind us. The cable car back was full of skiers heading down for the day (we were on the second-to-last run).

Our hotel had an indoor pool, so the kids were thrilled to burn off some energy that way before we headed into town for dinner. We ended up at a restaurant that was apparently very busy, because the grouchy proprietor told me so while yelling at us because when he asked a question about an order everyone talked to me rather than him (because I'm the only German speaker, I'd have to first interpret what he said, then the reply). None of that was too bothersome, however, because ... mountains. So beautiful. We just couldn't stop staring. Frankfurt is very, very flat. 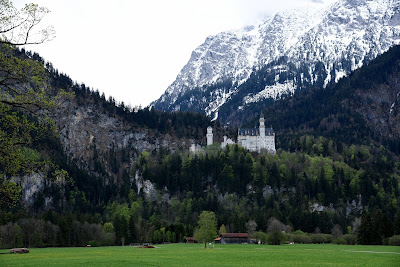