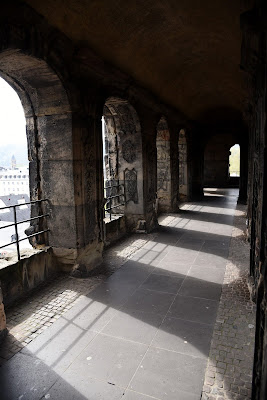 From Burg Eltz we headed, wearily, for our stop for the night, Cochem. We had great plans for Cochem, but in the end visited neither the castle, nor the mustard museum, nor did we take the chair lift that probably afforded very lovely views. After checking into our hotel we wandered around the town, finding life sized chess and checker boards by the waterfront. This of course was exactly what thrilled the kids so we let them have some downtime while we watched the sunset.

The next morning we set off for Geierlay Bridge. A friend had mentioned German's longest suspension bridge, not too far off the road from Cochem, and it was just obscure enough to catch our attention. It's a suspension bridge over a valley. Google and online information direct people to one side as the "starting point" and that is where we went. All the reports online warn of hostile villagers and that people should only park in designated lots or else... so in some respect i do wonder what is on the other end and if parking there would have been friendlier.

There was a couple doing a photo shoot on the bridge, complete with props and costume changes. It was interesting to watch for a minute and a half, but as they had gotten between us and the kids we eventually bullied our way through to catch up.

After getting some fresh air and exercise, it was time to settle in for the drive. Our friends put Trier on the list - it just wasn't on our radar - and it ended up being such a highlight! We got to town early enough to get the museum/sight tickets and wander around Porto Nigra - an original gate from when the town was a major Roman city.

We also wandered around the town and ended up checking out St. Ganglof Church (because it sounds so much like Gandolf! and because it's a market church, right in the middle of everything) as well as the Liebfrauen Kirche because I love the ladies' churches. They are never as outrageous and gilded as the mens'. I tell myself this is because nobody would spend all that money on silly females. We were a bit church'd out so we have no photos. It's hard to go church-sighting when the first one was Cologne's Cathedral. Few other things compare.

The other highlight of Trier was introducing our friends to doner. It is not obvious to everyone that Turkish food is quintessentially German (i.e., because of the huge ethnic Turkish population) but it was delicious and I wished we had done this sooner in the trip.
Posted by Terry at 8:00 AM