From Cologne we planned some time in the Mosel River area, ostensibly for some more wine tasting although in the end we decided to keep wine to mealtimes and do other exploring. Terry and I made a secret pledge to visit no more than two churches, or two castles, or two museums (get the picture) on any one day. So we maxed ourselves out on our way to Cochem, which was originally chosen as a nice midpoint on the Mosel on the way to Trier. 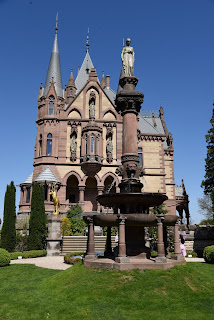 Up first, Schloss Drachenburg. The climb to the top of the tower reminded the adults of how out of shape we are, but had a lovely view of the entire valley. The rooms are exceptionally arranged with all the furnishings they would have had when the building was occupied. There was also a somewhat random exhibit of the local flora and fauna housed in a separate room that had two different entrances from outside/a stairwell but no apparent entry into the rest of the building.
Schloss translates roughly to "palace" and burg is "castle" - the difference between a building built for royal enjoyment and one meant to protect and defend. From Schloss Drachenburg we headed to Burg Eltz - one of the few stops on this trip where I had previously been. To me Burg Eltz is a total fairy tale castle. Although the group outvoted me - we did not take the walking path to the Burg but rather the shuttle bus one way and we walked on the road the other way. They thought it was a shortcut, I am pretty sure it wasn't. 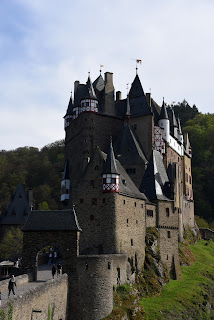 We got there at the height of the day, so the line was LONG. I sent the family to check out the treasure room - a smallish museum that one can free enter and exit housing armaments, jewelry and such - while I manned our places in line. Admission into the Burg is only with a guided tour and no photos are allowed inside. It's still totally worth the visit. They were so busy they only had German language tours (although the web site says they can also do English or Dutch), but we were given pamphlets in English that did a surprisingly good job of summarizing what the tour guide said. Burg Eltz is still in the hands of the family that has owned it since the twelfth century and many if not all of the artifacts inside are family heirlooms.