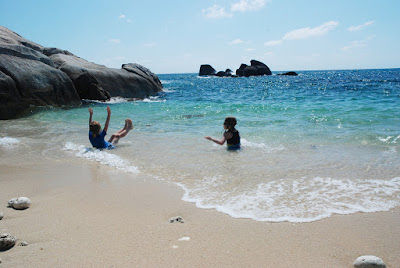 After the running around in Cambodia, we had a week in Thailand to do beach-pool-beach. We chose Koh Samui and split the week between two different parts of the island - one more touristy and one quieter. The first place we stayed was across the street and down a little path to the beach, and the part of the beach immediately in front was very very rocky. Hurt-the-feet rocky. On our first day we stupidly didn't wander too far and it turned out we could have gotten away from the rocks within a 5 minute walk. The surf was also a bit strong, and there were tiny jellyfish although they seemed harmless enough.

On our second day we went to visit Grandmother and Grandfather, two rock formations so named because they resemble, um, girl and boy parts. Grandfather was impossible to miss; we weren't 100% sure if what we thought was Grandmother really was. The kids got bored of the rocks real fast, but there was a tiny little beach sheltered by the rocks and they had a blast playing in the waves. We also had our first taste of Leonardo ice cream and sorbet. 10 flavors of ice cream, 20 flavors of sorbet! Alex was in heaven. They were generous with the tastes, and the (owner? manager?) some Italian guy told us all about their process and how they need 7 kilos of lychee to make 2 quarts of sorbet and how they chose the right variety of mango for the mango sorbet. We got passion fruit and mango, kids got coconut (or was it banana?)

On our second day we also met the family in the room next to ours, who had kids about our kids' ages and were at the end of their stay so gave us some good tips. They said there was the night market in Bophut, the fishing village, and it was supposed to be the best night market so they recommended we see it. An exorbitantly expensive taxi ride later - the island is way bigger than I thought - we did. We ate dinner at The Address, a restaurant that was just a random choice but was so good we ended up taking another exorbitantly expensive taxi ride back at the end of our time in Koh Samui to dine there once again. The kids' meals came with ice cream, which Alex of course couldn't have, so we were happy to discover another branch of Leonardo and got her sorted with amazing sorbet.

We rose early the third day to try to catch the sunrise on the beach. On the fourth day we moved to what was the nicest hotel of the trip, save the ungrounded hot water heater in the shower that made Terry's first short a shocker. The kids' room had a full bathroom too, so thereafter we just all showered in there. The sand was so soft, and the beach as calm as a lake. The hotel had kayaks to borrow and the kids each got pretty good at maneuvering on their own (yes even Zoltan).

We tried all four types of mangoes at the grocery store. We brought home three pineapples and 8 mangoes. We ate our weight in mango with sticky rice. We went out for Japanese food (had we known about Cafe Momo at the time perhaps we wouldn't have bothered).

And by the end, we were ready to come out of the heat and return to the snow.
Posted by Lynne at 11:21 AM