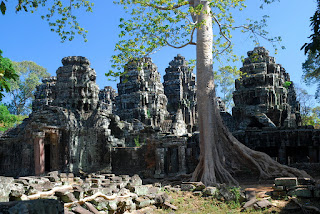 For our second day we were more organized, and although it became a bit of a chore to make the guide slow down so we could go our own pace, we enjoyed the day much more than the first. We visited Angkor Wat itself and made sure to take our time, absorb what we were seeing and hearing, and rest often.  This is a part of the world I know very little about, so it was particularly interesting to me to hear about the long ago kings bringing Hinduism, then Buddhism to the country (then back to Hinduism, chipping the Buddhas off the walls, then finally settling back on Buddha). I was also surprised to hear about the wars and alliances (Chinese helping the Khmer fight the Javanese? And wait, how big were these empires - why were the Javanese even in the picture?)

We also made the trek to Bantei Srei (not nearly as interesting as the stuff I had read online lead me to believe, but at least the lengthy car ride gave us some air conditioned time to refresh and relax) and Bantei Kdei, which was hands down the kids' favorite place. If Terry weren't wilting so badly in the heat we would have stayed quite a bit longer. Like the more famous Ta Prom, it has trees growing in, on, and through the crumbling temple complex. Unlike Ta Prom, there are fewer people, fewer guards, and basically the kids could climb on anything they wanted and were only restricted by our parental sense of moderate vs. extreme danger. We closed the day at Ta Prom and I probably would have gotten more from the experience had I ever seen Tomb Raider.
Posted by Lynne at 11:03 AM