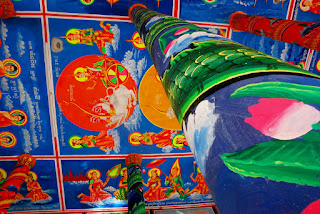 Our fourth day was definitely the highlight of the trip.  This tour company, Bees Unlimited, had been recommended on some blog, I forget which, and served an unforgettable slice of Cambodian life.  Although the company's origins appear to have been about exploring the flora and fauna related to Cambodia's migratory rafter bees, there is also a wonderful general tour.

As the family had been sick the day before, we forced some toast down everyone's throats before the 7am pickup, even though we knew we were being brought to the local market for breakfast. I tried to taste as many things as possible, but was just too full to get it all down. I did have some delicious coconut milk-tapioca soup with bananas and something else sweet in it to start. Also jackfruit and longan, and sugarcane juice (served in a baggie with a straw, like 20 years ago when I live in Singapore. That was a pretty cool flashback. You haven't drunk a beer until you've drunk it in a baggie from a straw). There was a breakfast I can't remember but it included fried lily pad greens (or some kind of water plant green. It was surprisingly delicious).  Towards the end we tried these fried rice balls with banana. We wandered around the market. This part would have probably been a highlight for a smaller group, but as it was we were 9 people - our family of four and another family of 5 - and the market was crowded, so we could rarely hear what Dani had to tell us about this or that, and we often got caught behind a traffic jam of humanity and had to scramble to sight and catch up with the group. We finally had to tell him we were all done and it was time to move on.

From the market we jumped into our two tuk-tuks and headed into the country. Our first stop was to watch women weaving baskets. Mothers teach their daughters and this is one of the crafts that appears to still be alive. After watching all the different ways people used baskets during our time in Cambodia, we were inspired to want to buy more of our own (I never would have thought to use a basket as a colander! but of course once you see it you say "duh"). From there we visited a Buddhist temple with the brightest color scheme I have ever experienced in a place of worship.  The paintings all over the walls depicted stories from Buddha's life - some I knew, some I didn't. The kids played a game of finding the unusually-colored people (usually blue - Vishnu - or green - not sure who that was).

Palm sugar is a local product.  It starts with syrup. Making syrup is similar to maple syrup - tap the tree, gather the thin, slightly sweet/sticky sap, and boil it forever and a day until it reduces. When it does, it is the consistency of honey. Then they do something to the syrup to dry it into sugar. We went to two different places to see different stages of the process.  The kids were thrilled to have a taste of the thick syrup and wanted to go back for more again and again.

One lady we visited was a cupping practitioner and Terry gamely agreed to have it done. She would "rinse" a glass jar with a flame, then place it on his back to create a suction. It is meant to pull toxins out of the body. It left a massive set of circular red/brown marks on his back - I told him he looked like he had just gotten out of the Matrix. The wife of the other family also got it done. While they lay with the cups we played with the three-week-old puppies.

The kids became bored and cranky after a time, so Dani pulled another trick out of his sleeve. Many (most? all?) tuk-tuk drivers keep hammocks in their vehicle and while waiting for the client (tourist) will sling it across the vehicle and take a nap. So we slung the hammock and the kids got to ride in the hammock while we went from place to place, and if they wanted we'd let them sit out one or another sight and hang out there. They perked up quite a bit with this treat.

We also visited a blacksmith, and a two families who participated in different steps in making rice noodles.  The noodle process is fascinating, they first grind the rice into something like a powder. mix with water to make a paste, then there is this huge contraption to knead the rice dough. When well kneaded, it is then taken across the street to the place that turns it into noodles.  We were able to taste some fresh rice noodles minutes after being made. Yum!

One elderly lady we visited makes incense by hand. She takes bark from a particular tree, and mixes it with an herb or two, waters it into paste and rolls it out onto the sticks to make incense.  She makes two different scents, that's it, and it's all natural, and she sells them out of her home. People know she makes the incense and they come to buy it. We bought some and Alex has been begging to stick some in her room.  Dani explained that this is a traditional craft that is not being preserved - obvious by the lack of youngsters around her, common at many of the other places, learning the process.

Although we were still largely full from the market, we made a bit of room for lunch. For me the bet part was this thin pancake that Dani said was essentially just rice flour, water, and turmeric but it tasted much better than that.

Our last stop was to visit the monkeys. Dani had developed a relationship with one in particular who would (and did) climb up on him, and us, and perch on shoulders or on top of heads. He had brought things to feed them, peanuts and lotus seed pods. The monkeys were careless eaters so a few times I was able to rescue a half-eaten pod and hand out more lotus seeds to the kids. They liked the older, bigger monkeys better as they took the food more civilly - the younger monkeys just grabbed. Of course, we adults noted the bigger monkeys had the leisure of civility, as they often chased smaller monkeys away from the food.

On that high note we headed home for some much needed rest and time by the pool.
Posted by Lynne at 8:14 AM