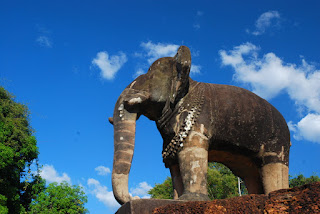 In our sixth year in a 6-month-winter post, I decided demanded the family spend some vacation time somewhere warm enough to wear shorts outside.  We eventually narrowed the world down to a week in Cambodia and a week in Thailand.

We flew into Siem Reap in the evening of December 31 (happy birthday to me!).  I was pretty used to auto-rickshaws, having used them as my primary means of transportation when I was in India many years ago, but these tuk-tuks are a bit different - basically a motorbike with trailer. They are also quite a bit bigger, which was a relief as the hotel transfer vehicle was a tuk-tuk and we were concerned how on earth the thing would get us and all our luggage there. It all worked, the kids were enthralled by the ride, and by the time we got to the hotel and checked in we were ready to crash. We were woken up at midnight for the fireworks we could hear but not see, but thankfully the kids slept through it. We got up relatively early, but it didn't feel too early as the sun rises around 6:30am there. Turns out I am affected by the amount of sunshine I receive, at least, my sleep patterns are.

We had a packed schedule for our first day in Cambodia, and in retrospect we should have been more firm with the tour guide we hired. By lunch I was already confused about which temples we had seen, was worn out and cranky and barely even cared what we did next. Terry did manage to get some pretty pictures though, and the kids had fun working through the activities in their Cambodia guide books we had ordered through EFM-owned Greenfeet Guides.  Zoltan eventually got bored of his, but he's more of a doer than a sit-downer. Alex kept hers alive throughout the vacation, even pulling the book out to cross off new fruits when we tasted them in Thailand.

By the time we were dropped off at the hotel around 4pm, after dropping one temple from the itinerary, we were all beat. The hotel pool provided some much-needed refreshment and we managed to survive until bedtime.
Posted by Lynne at 11:01 AM