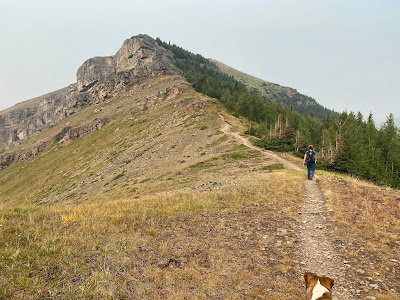 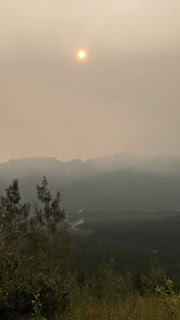 Last week a woman I had met in a hiking group asked if I wanted to accompany her on a hike that, according to Alltrails, is way longer AND steeper than anything I had ever done before. But I have been wanting to push myself so I said yes.  On Friday night a wildfire started on the other side of the mountain we were to hike.  But others were heading up when we met at the trailhead so we decided to go for it.The smoke at least obscured the sun, making what we supposed to be a "heat warning" day into something way more comfortable temperature-wise.  But, we were breathing in smoke and all vistas were obscured.  The trail is almost unrelentingly steep - we made 1000m elevation gain in about 6 km.  We hoisted ourselves up boulders and slipped on scree on some of the steepest parts.  I gave thanks for my water bladder because it meant I didn't have to stop and pull out a water bottle every time I needed a drink.  Also, it's so thin and light that I can carry a lot more than a water bottle will fit. I drank a LOT of water.

It has been quite a while since I have hiked a mountain where you get to what looks like it will be the top only to find it continues up. Four times we said "almost there" ... four times we were wrong.  We passed the weather sensors, which was super cool because these are on the ridge above the slope where we skied last winter, and every time we check the area's weather and I type "Kananakskis" in the search bar, "Nakiska Ridge Top" comes up and that is exactly where I was.  We continued along the ridge a while, but between the smoke starting to cause headaches and the understanding that we would have to recreate the hike to get some actual stunning views and some photos of something that doesn't look apocalyptic, we cut the hike a bit short (it's supposedly just shy of 16km total and we got to 11.2km).

On the way back we met this little guy.  We took a photo from way back on the trail, then walked a bit closer for a better photo, then realized it didn't seem to notice us at all so we got closer ... we probably could have touched it before it scampered off onto the ledge right beyond where we could see it.  I couldn't decide if it's very comfortable with humans, or has had so few interactions it didn't consider us threats. 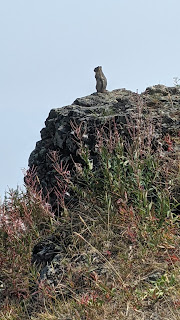