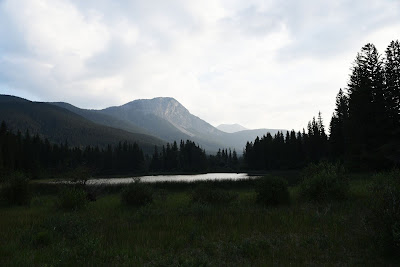 Lunch included a surprisingly delicious bean and quinoa salad, which was good as the sandwich was salami and I hadn't alerted the camp to any food issues.  After lunch we trooped over to the climbing wall.  There were two "easier" sides and two harder sides.  The harder ones were legit - even Alex didn't get all the way up them.  I regret not fully trusting the belay and thus not climbing higher than I did. 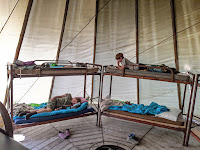 By this point the kids were mutinying for down time, so we headed back to the tipi for reading and resting.  We had originally planned to participate in the pre-dinner all-hands water fight but when it came time to go, we were cool and comfortable in the tipi.

Dinner was a full scale BBQ feast. Pork loin and grilled chicken, mashed potatoes, green salad and cauliflower salad.  We ate too much so I didn't feel up to joining the after dinner yoga session.  We were also in the midst of Master Labyrinth, which is played very, very differently from regular Labyrinth.  Alex absolutely swept the floor with the rest of us, showing once again why it is important to not have only one person reading the rules (She who reads the rules, wins. Unless others also read the rules).  After some digestion we had the kids teach us GaGa ball.  I now understand the name - every time I miss the ball I yell "Gah!"

There was a silly singalong the counselors led "around the campfire" (imagine an atrium with a fire pit at the bottom in front of the stage). Even the moody, jaded teenager was seen to laugh.

Not pushing our luck with the kids, we dropped them off at the tipi when we wandered back to the waterfront - we had wanted to try taking some photos with the real camera as opposed to our puny phones.  The haziness was way down - winds must have been blowing the smoke some other direction - and the view was lovely.

On our walk back to the campsite, I was walking in front of Terry when he hissed for me to come back over to him.  I figured he saw a deer or something he wanted to show me, and I saw a dark shape move past through the trees alongside the path.  Yeah, it was a bear.  He said it was pretty small so he wasn't sure if there was a mama nearby and if we continued on we might get between them.  Of course, continuing on was the only way to get back to camp.  We waited and watched a few moments, then started backing away towards the trail.  We were basically at the corner of a wooden walkway that in wetter times crosses some kind of pond or lake but right now crosses a field.  As we started over the walkway, talking loudly about how "We're cool, mama bear, don't want anything to do with you and just going to head out now" a bear heads out into the field essentially parallel to us.  It was beautiful, Terry and I will forever argue about how big it was, and it is definitely just living its life, not concerned with us.  It was definitely the smart thing to do not to stop and take a photo (even though the camera was in Terry's hands!!) but we did regret it a tiny bit once we were out of range and no longer quietly freaking out.

We had seen two people in the frisbee golf area by the waterfront, so we went to the main lodge to tell the counselors about the bears.  Apparently other families had seen at least one of them in a similar area in the morning, so this is not a big deal.  To the Canadians.  For the rest of the trip whenever we went past the area where we saw them Terry and I would talk louder. We still haven't told the kids. 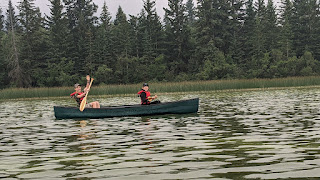 For our last day we headed back to the waterfront, this time to canoe by age-pairs - parents in one, kids in the other.  Terry turned out to be as motivated as Alex and I definitely did not rest as much as I had planned.  But it's OK because we saw the loon again, this time it was two adults and one baby, and they were farther away.  We went through a narrow area into a bay area where we watched what looked like a baby duck practice flying. It was barely above water, splashing all over the place, and going back and forth across a wide stretch.  Never seen anything like it!  Of course we failed to capture that on film as well.

After canoeing we headed toward the Adventure Challenge.  They did a great job with boards, tires, sticks, and imagination.  Our family was persisting in our last challenge after everyone else had left for lunch.

The last phase of camp was the high ropes course.  The first event was basically climbing to the top of a telephone pole that had a see-saw on top. People (kids) climbed up in pairs and were meant to stand on each side of the see-saw. If I remember correctly, there was only one pair that actually made it to the top with both standing. To get down, they lean back in the harness and trust their belayers to get them down.  This was nobody's favorite. The last event was like a vertical obstacle course.  I'm hopeful Terry posts a photo or video of this as I don't now how else to describe it. Alex was one of the few to make it to the top,  and she scrambled up it twice.

We have caught too many smiles on film to take seriously Alex's complaint that it was a horrible time and she never wants to do anything like it again. What can I say, 13's gonna 13.