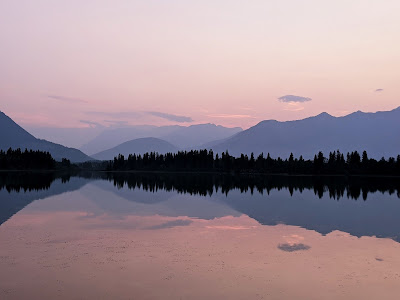 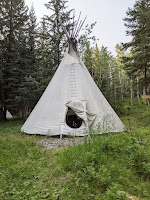 We arrived Friday after dinner, were directed to the family's assigned tipi, got a bit unpacked and returned to the main lodge for a snack and trivia.  They are super strict and serious about NO FOOD IN THE TIPI and basically food should be either in your car or what the camp serves, eaten in or near the main lodge.  This is worth taking seriously; more on that later.

The trivia was mostly about Canada and although we would have gotten a D if it were for school, we were happy we didn't fail.  The main lodge has games, arts and crafts (appealing to the littler ones), bathrooms with flush toilets and a water refilling station.  Families are assigned their own tables, and the camp operated like a restaurant in that we wore masks as we moved about the room but took them off when hanging at the table.

We decided to take a walk in the evening and wandered over to the waterfront area where we would be canoeing the next day.  There's wildfires raging around Alberta and B.C. and pollution is very pretty.

The tipis are outfitted with five bunk beds and a fire pit in the middle.  We didn't understand that we needed to open the smoke flap at the top when building the fire so things got a bit smokey.  It was too hot to keep the fire going anyway - such a weird feeling to be in short sleeves at 10:30pm at a campsite in Alberta.

Sleep came late - that massive fireball in the sky keeping things light until after 11pm - and was broken by the sounds of squirrels frolicking all around, inside and out.  I gladly jumped out of bed around 7:30am and got myself dressed and ready for breakfast, which doesn't start until 8am. 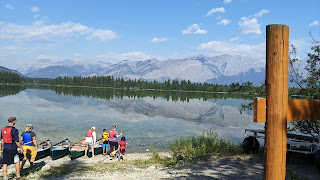 Pierogies for breakfast was unusual but worked. The kids gobbled down the blueberry pancakes. There was actually a whole raft of food but I forget what else we ate.  First activity: waterfront/canoeing.  We were first told there needed to be an adult in each boat, so Alex and I paired up, Zoltan and Terry in a different canoe.  Alex had goals and was not impressed with my performance. When we paddled over to the menfolk they were watching a loon and her baby, so we hung around and watched them too.  And listened to their unusual call.

But we had other plans so we soon headed back to the dock where we shed the lifevests and canoes and trekked over to the archery range.  They didn't get a lot of families who owned their own bows so were more impressed than they should have been at the family performance (except me. I haven't shot a bow since my camping days about a million years ago).  After a few rounds we tried our hands at the javelins.  They had atlatls too, which Alex was excited to see as she had done a report on Aztec weapons last year and had learned about them. We were not particularly skilled here; I am pretty sure it's the kind of thing one must practice to get right. 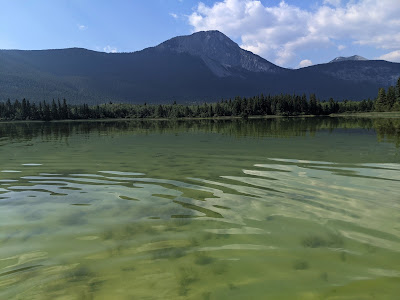