And a-camping we go: Rampart Creek 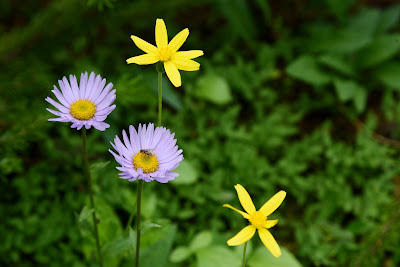 Part of the mad scramble for campsites means taking what you can get in terms of dates, or in terms of campgrounds.  My second priority was to camp along the Icefields - there are so many cool hikes but they are too far to get to from home. So, for this week of vacation we spent 4 days at Two Jack, came home for a night of showering, laundry, and repacking the cooler, then set off for 5 days at Rampart Creek.

The two campsites could not have been more different from each other. Two Jack is thinly treed and the sites are very close to each other.  At Rampart each site is nestled among trees and there is plenty of space between them. Two Jack was so civilized - running water and flush toilets!  Rampart has one spigot of potable water at the junction of all three campsite loops. For similarities: both places were a million times warmer than any of last year's camping experiences (a full 1/4 of the clothing we brought we never used, lots of long johns and woolens), both had really bad smoke and fire bans in effect. And mosquitoes.  We ended up cutting the trip short by one day due to the smoke and running out of bug spray.

First hike: Wilcox Pass.  Supposedly beautiful views, and I can believe it.  We did spend a bit of time playing in a patch of snow we came across, and when Terry and I took a short detour to a flowing stream the kids watched a prairie dog scamper about.  There were pretty wildflowers all along the path and in the distance.

Last hike: For the aforementioned reasons, we decided to cut the trip a bit short and head home. So on the fourth day we broke up the camp, packed the cars, and headed over to Wildfowl Lake where our last hike of the trip - Chephren Lake - would begin.  It was the family highlight, mostly because the kids have become allergic to elevation and this one was barely up from flat. We usually pace 20 minutes per km, and for this it was a solid 15.  The hike itself is mostly a flat walk in the woods - so meh in my book. But the lake itself is stunning.  And because the mountains rise right out of its waters, they are close enough to photograph and actually see something.  On our way down we ran into a group that was going up to swim in that water - again, Canadians made of sterner stuff than us.

Bear: There were signs up all over the campground alerting folks that there was a bear in the area.  According to the chalkboard by the water source, it had last been seen 5 days ago.  But apparently all the good berries are now ripe because between 9:30-10:30am each morning the folks camping in sites closer to the water than us has sightings. One day on our way back from a hike we passed a car with its hazards on, pulled not-quite-over enough on the shoulder a couple of km from the campsite and Terry noted there was a bear the car had pulled over to watch. I only saw a dark blur as we drove past.  It's probably the same bear.

Sunsets:  It was a lot like Goldilocks' lunch. The first night we waited too long to wander over toward the creek to get a sunset photo and the sun was already behind the mountain by the time we got there.  So our second night we went extra early, but got so bug bitten we had to give up before it got the real fiery reds.  Third night was just right, and Terry was able to capture some pretty pictures. 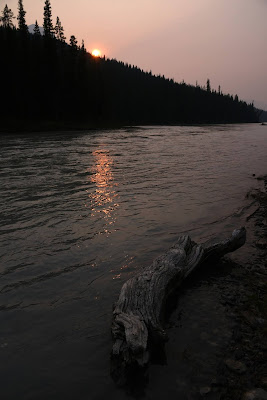