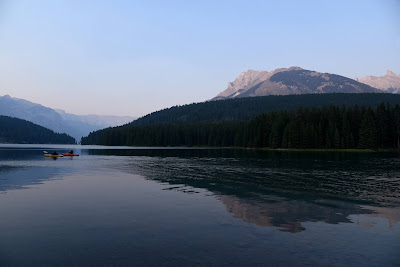 When we were watching and refreshing the Canada Parks web site like concert tickets were about to go on sale, our strategy was clear: we wanted to camp at Two Jack Lake.  We've driven past it a million times, wandered along its shores from the Day Use Area and even ice skated across it. As Terry was 6000-something in line, we did not get our first choice of dates, or second choice, but we got dates that we could make work and we were thrilled.

Well, smoke from the wildfires. And even though it's so dry there are the aforementioned wildfires, and a fire ban so we couldn't sit by the campfire at the end of the day, nobody told the mosquitoes.  We had very recently bought a screen tent for over the picnic table and that paid for itself during the course of the trip, even if we had paid three times the amount for it.  Poor Zoltan looks like he has chicken pox from the bites and that was with the mesh doing a very good job keeping the 'skeeters out. 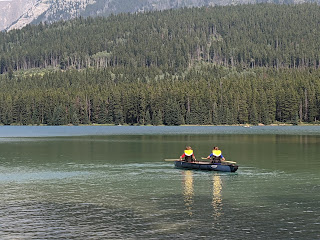 Our plan for Two Jack involved canoeing and swimming.  Except we didn't end up swimming because we had pretty well cooled off by the time we waded into knee-high water.  Canadians are made of hardier stuff than us (one of Terry's colleagues had camped just a week or two before and had done quite a bit of swimming).  We did get out in the canoe quite a bit though, in all kinds of 1, 2 and 3 formations - the canoe does not fit all four of us anymore.  Alex will deny this until her adulthood at least, but she enjoyed her solo adventures.  She'd be grumpy and grumbling, paddle away, and return 45 minutes latter full of smiles.  But don't tell her, she "hated every minute of camping."

There was the loon that I swear was mocking us, letting us get almost close enough to see it through the glacial-clear water when it ducked under, but then zipping away before we actually got that close ... and popping up on the other side of the canoe + 50 meters. 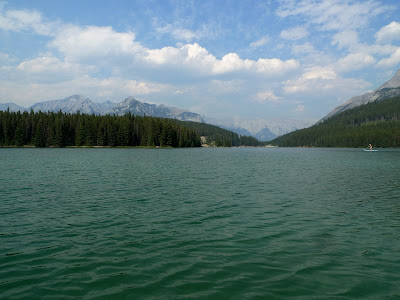