Russians and their language

It is well known to people who have ever tried to speak Russian to a Russian that they are very particular about how their language is spoken. "Muttonburger" gets wide-eyed stares, "Moo-ton beurh-gher" get the waitress scribbling in her pad. So far as a I know every detsky sad has a speech pathologist who comes by to check that the kids are able to speak properly. 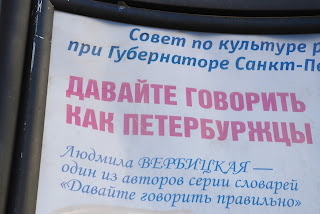 So it should come as no surprise that all over town for the last few months have been these billboards proclaiming:
"Let's Speak Like Petersburgians"

At first I had no idea what it was all about. T explained that it's meant for people who are not from Moscow/Piter but other Russian speaking countries or other parts of Russia who may not
speak "properly".


One billboard I saw a few months ago went through numbers. This one seems to have negotiation and worker type words (agreement, facilitate, draw/scoop, quarter/block ...  but then "utterly"?) 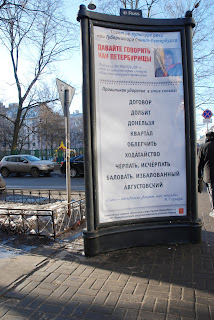