My friends live in this neighborhood of Vilnius called Uzupis. Well, it may be a neighborhood. It may also be a neighboring country, as Uzupis announced its secession from Lithuania on April 1, 1997.  The region celebrates its independence day on April 1 and has its 41 point constitution posted in several different languages along a brick wall. Provisions include the serious: "Everyone has the right to hot water, heating in winter and a tiled roof." and the less serious: "A cat is not obliged to love its master, but it must help him in difficult times." The full Constitution is here.  Here I am reading it: 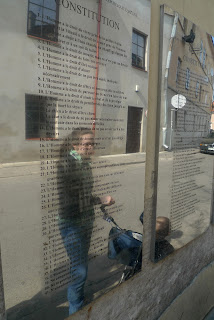 The most famous monument is the Angel of Uzupis... 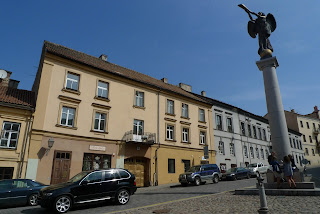 Like in Russia, the custom of married couples locking a padlock on the wrought iron of one of the bridges is alive and well. We even saw one that was particularly special to us. 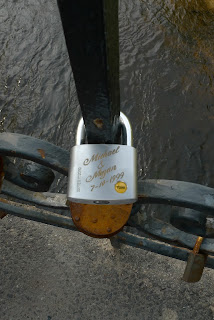 After our sightseeing, we stopped at a random cafe (Uzupio Picerija) for a snack. Who knew? We each got what were essentially blini and they were fabulously delicious. Thus fortified, we headed over to Tibet Square, a little park right by the bridge out of Uzupis that has Tibetan prayer flags all about as well as some sweet wooden swings hanging from several trees. 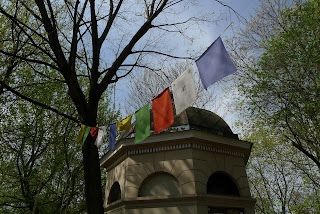 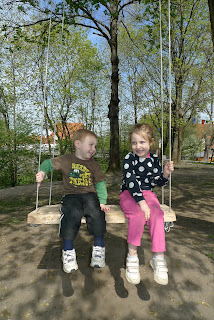