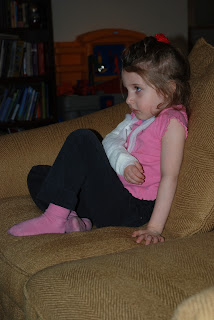 Our poor Alex. Yesterday evening she ran into the kitchen to give me some good news (she won a game with Terry) and slipped in her slippery socks and fell, using her arm to break the fall. She complained of the pain, except for when the TV was on. No swelling, no discoloration, she could move her fingers. Figuring she just banged it hard, we gave her Motrin and ice packs and we did dinner, bath and bed.

This morning she continually vacillated between "mommy I hurt so much" and "it doesn't hurt at all" so once it was late enough to call a doctor at home on Sunday I called the Consulate doctor to confer with her. She advised we wait and see for a few more hours and we did, eventually deciding to get an x-ray. She called the clinic that was walking distance from our apartment, set it up and called me back to say they were there and waiting for us. I pack a bag, throw Alex in the stroller and we race down there. We get to the reception area and the girls there have no idea who we are, who we're there to see or why we're there (they do speak English so it wasn't my bad Russian) I eventually have to call our doctor again to put her on the phone with the receptionists and they do indeed find me in their system.

The doctor came out, asked "shto slushilas?" (what happened) and between Russian and pantomime I think he understood that she ran and slipped and fell. He felt her arm and said we'd go for the x-ray. Of course Alex was very nervous but she was brave and did everything the doctors said to do. They let me stay in the room with her too, which helped a lot. The picture came right up on the screen in the room and they showed me the fracture. The doctor even said "fracture" so I am pretty sure that's what it is.

He then said something to the effect that they didn't need to do anything, just the arm needs  .... and then pantomime of something around the arm. I asked "splint"? and he said yes. Turns out that was a miscommunication because he meant that she didn't need surgery and she only needed a cast. So he was probably amused when I asked if she needed to wear it all the time.

He led us to a hallway with a bunch of clusters of chairs in front of doors and said something I didn't quite catch, so I asked Alex if she'd understood. "Yes, he told us to sit down." I am sure she hears that command a few times a day at sadik! so I figured she was probably right. And she was. They put the cast on, which was another nerve-fest for Alex but I held her good hand and she clung to the stuffed animal she'd brought and we made it through. She has to wear a cast practically up to her armpit for 2 weeks, then they can cut off the part from the elbow up and she has to wear the shorter cast for 2 more weeks.

One thing I will say - from the moment the cast went on she had not once complained about pain.