Sunday morning we were up, packed, breakfasted and ready to go at 10am.  First stop: Yuriev Monastery.
Natasha showed us an original surviving building from 1119 that was an architectural and acoustical fantasy that modern-day experts couldn't deconstruct, feared it would fall down around them, so reinforced supports with so much brick as to destroy what made it so amazing. Sigh. 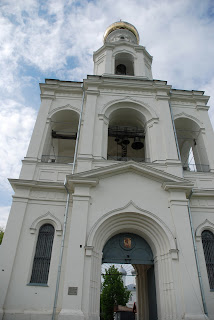 Alex running through the dandelions 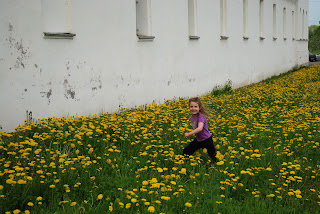 Zoltan with his bouquet 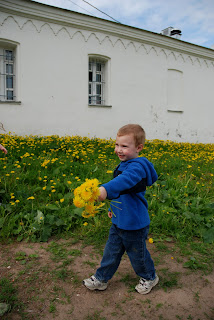 The final stop was the Vitoslavistsky Museum of Folk Wooden Architecture. I loved the irony that the wealthy people who could afford chimneys (there was a tax) were pest-ridden because the poorer "black" houses, so encrusted with soot - inside - couldn't support insect life. Natasha told us we were lucky to come when we did, there is a big festival next week and they were preparing for it.  There were men dressed in some kind of period costumes with eagles and I think I saw a falcon, and plenty of snack and souvenir stalls.  We definitely didn't spend quite enough time there, but it was moving past lunchtime and we assumed dacha season Sunday afternoon traffic would be rough. At least we got the kids some fun things to remember Novgorod - wooden flute/pipes and colored pencils made out of what looks like a large segment of branch. 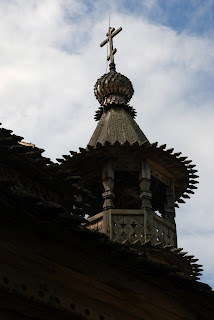 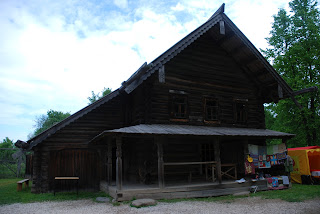