Part I:
On Saturday we filled the Sequoia and headed to Trakai, famous for its castle on a lake, its Turkish Jewish history, and its meat pies (kibinas). Other than the oppressive heat, everyone was pretty happy. The kids picked dandelions, the adults took photos of the castle and the kids. 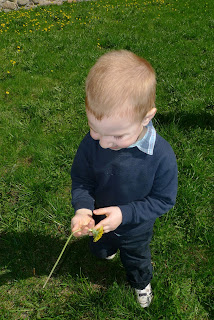 We took refuge in the shade of trees just on the waterline. Zoltan had been gathering rocks and throwing them into the lake. 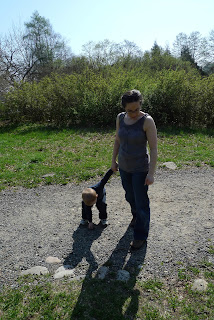 He had two fistfuls and started to run headlong toward the water. Before anyone could stop him, the land stopped but he didn't. I was doing something else and suddenly was met with the view of a hysterical screaming Zoltan being carried by Terry and clearly dripping wet from the armpits down. Still clutching two fistfuls of rocks, that he continued to hold onto throughout the next steps.

We quickly undress him and get his sweatshirt on (we had just finally convinced him to take it off moments beforehand ...) As Terry was putting a new diaper on, our friend was in quiet conversation with her youngest, who's the same age as Alex. She had worn a dress with leggings that day, and the leggings were quickly stripped off and Zoltan had his new outfit. You can see that he did recover from his trauma to enjoy the rest of the day. 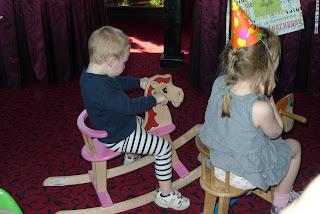 He did finally drop the rocks, too.

Part II:
The next morning we were heading out. The kids had been arguing whether we should take the elevator or stairs. Zoltan seems to have no love for the elevator - he always asks to hold someone's hand whenever we're in it. BUT he does love to press those buttons. In the end the decision was made to take the stairs so Terry and I head off to the right, while the kids are still by the elevator to the left. We hear screaming. This is not as unusual as one would hope so we just yell over our shoulder to Alex "Why is Zoltan crying?" as she is usually the cause. Alex appears by our side. We realize Zoltan is still screaming. *#&^(@*&^  He pushed the button, got into the elevator, then the door closed. He was alone and trapped.

Luckily it's a small hotel and nobody had called the elevator in the 10 seconds it took to get there and press the button to "call" it and thus open the doors. Obviously, we took the stairs that morning.
Posted by Lynne at 6:24 AM