We went to Portugal nearly a year ago, when Terry and the kids came to visit me last winter break. It took Terry a while to edit the photos.

After three days in Porto, we hopped a train down to Lisbon. There, we cashed in hotel points and stayed at the Marriott. It's a lovely hotel, but a bit far from most things.

On the day that was supposed to be rainy (but was in fact sunny), we went to the Lisbon oceanarium - one of the world's best aquariums. My family would definitely agree with the assessment, as we ended up spending the entire day there. Zoltan even spent allowance to acquire Oscar the otter to commemorate one of our favorite exhibits. 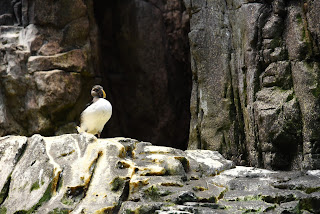 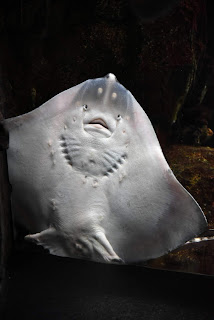 This guy doesn't even look real 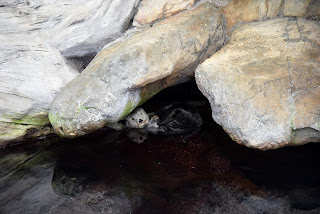 The otter was absolutely the highlight

The next day was supposed to have nice weather and rained all morning. Gloriously, as we approached our tour guide around noon at the appointed spot, the rain softened and dried up and we went on our "food tour" - put into quotation marks because it was so much more. Our tour guide, Silvia, was recommended by a friend who had been in Lisbon about a month before us and who also had kids.

She took us all around the city, introduced us to the city's "secret" street elevators, mounds of delicious food (and got our very reluctant kids to at least try more different dishes that Terry and I could have on our own). We had alerted her to Alex's intolerance so after bringing us to what she considered the best place to get Pasteis de Belém, she took us to a different bakery for treats Alex could try.In addition to all the food, she was a wealth of information about Lisbon's, and Portugal's history and some contemporary issues. I was so skeptical of some of what she told me I went and looked it up myself (yes, tempura, that Japanese delicacy, came from Portugal!) 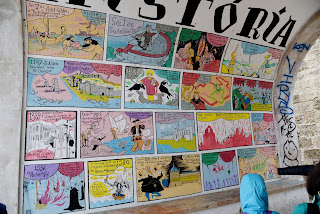 We took very few photos in Lisbon. This gem is of a comic depicting Lisbon's history, painted into an archway by a public toilet.