Friends invited us to accompany them to the "Apfel Fest" in Kronberg that boasted 100 different varieties of apples. Like Milli Vanilli, we'll blame it on the rain, but there were only two different stands of apples that included fewer than two dozen different types. Admittedly, within that much smaller sampling there were a bunch we had never heard of, much less tasted. And of course we brought home several kilograms of apples to eat fresh, make apple chips, apple crisp, and other delicious apple treats.

Then we took the opportunity to wander around the town. Absolutely charming. The kids gave out assignments: they handled scouting duties, I was the photographer, one friend was the "noticer" (noticing and pointing out cool things to look at) and the other friend was the all-around "helper."

I hope I fulfilled my duties sufficiently :-) 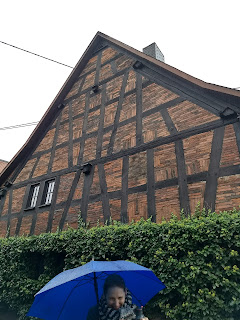 Half-timber, but with brick 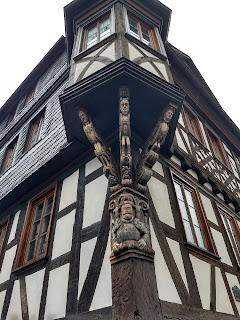 Carving on the corner of someone's house.
The guy who makes up the beam on the right has a flower covering his crotch. 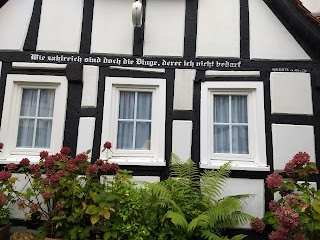 A Socratic quote someone decided to paint on their home.
The real question is, why don't we all do this? 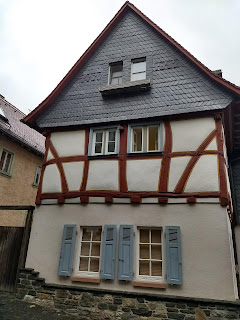 According to the slate numbers (look closely among the slate tiles), the house was originally built in 1456.
Posted by Lynne at 12:44 PM