On Labor Day weekend (not a holiday for the kids) we ventured over to Bad Homburg to check out the Roman fort. Having spent time in northern England, and from reading Rick Riordan books, we thought we were pretty well versed in all things ancient Roman empire.

The fort does a really good job with presenting what life must have been like for the Romans living in Germany. There were exhibits, for example, showing how they made shoes - from cutting the leather, to the kinds of thread used (boar bristle) to the nails used to attach the sole onto the upper.

There was also an exhibition and lesson of how to properly throw a spear. We would have been failed recruits of the Roman army, but it was fun and interesting nevertheless. 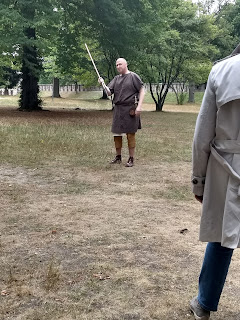 There was also this room of life-sized paintings where people could put themselves into the picture. And a trunk of "Roman" clothes for people to dress up, if they chose, while doing so. 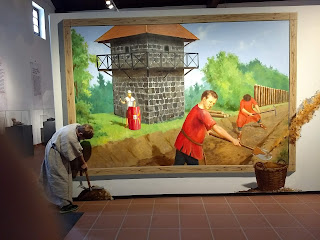 
We stopped for lunch in the museum's restaurant, which had been billed as having traditional Roman cuisine. I think my mushrooms sauteed in honey and I forget what else, served with bread and a soft cheese loaded with herbs, was probably a relatively authentic option. The kids' schnitzel ... maybe not so much.

Zoltan had forgotten his fleece so he and I shared mine, so we may have cut the day a bit shorter than if we had all been warmer. The kids insisted on stopping at the gift shop, where each one procured a new implement for the arsenal.