On Day 3 of the Epic Road Trip we left Pilsen for Saxon Switzerland National Park, which is not in Saxony nor in Switzerland, but instead in Germany near the borders of Czech Republic and Poland.

Kudos to Microsoft or whoever has that program of rotating beautiful places on earth as the logon background.  That's where I first saw a photo of the place a couple of years ago, with its spectacular rugged rock formations. By then I knew I was on my way to Germany for my next tour and I made a plan to get to it. It's a big pain to get to from Frankfurt, but it is a mere convenient waystation on the Epic Road Trip!

We took the usual tourist route across the Bastei Bridge, which is free although parking costs a little bit. The half-price fare (due to construction) to go into the space that was once an old castle was more than worth it, as it had several decent exhibits and signs explaining what used to be where. It also had some of the best views and closest approaches to the edges of rock. Imagining what could have encouraged people to try to live in such a harsh environment was a fun mental exercise.

We also got to watch a number of rock climbers try their luck against the sharply peaking faces. But apparently none of those photos met with Terry's critical eye because none of them appeared again after he finished editing everything. 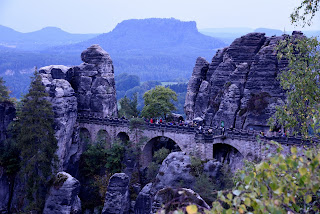 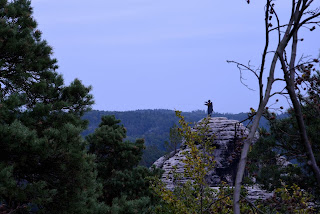 That is not a person. It is a sculpture known as the Angel. 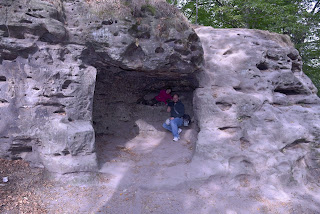 Terry and Alex hanging out in a cave while Zoltan and I rest elsewhere. It's hard being 8 when everyone else is older and stronger.