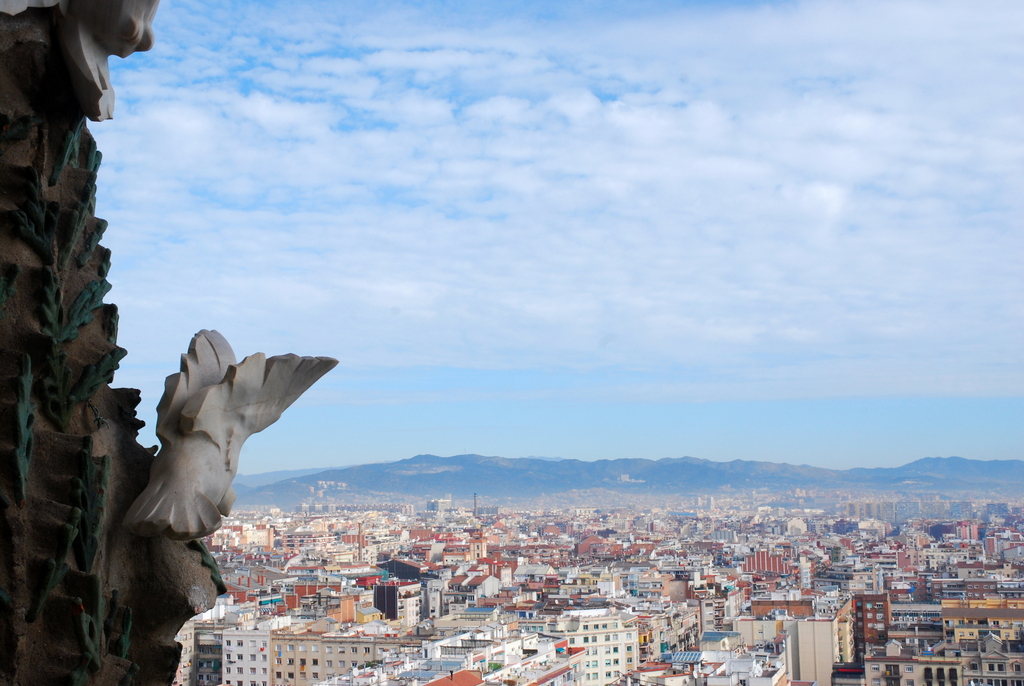 When asking for recommendations on Barcelona must-see spots, I received surprisingly varied replies on Sagrada Familia, ranging from "sublime" to "give it a skip".  With small children possessing small attention spans, any tourist site may stale after a mere half hour so you end up being judicious in your choices. Did I think my kids could manage 2 hours in a cathedral?  Did I think I would spend 2 hours in a cathedral?

When we bought the tickets [on Terry's Smartphone standing 3 feet from the ticket taker, rushing through to just get ourselves inside] we accidentally bought a ticket to go up the tower an hour later. Oh well, we figured the add-on cost wasn't much so if we didn't make it, no harm done. Instead, we scoured every inch of the inside, marvelling at the stained glass and how beautifully it contrasted with the mostly plain stone walls.  We popped outside for some sunshine and took in the stonework on the facade.  One of the things I found so fascinating was that many different styles were used, yet in my eye it all worked.  Also, to be honest, I found it a highlight that the carving itself was the adornment without paint or gilding.

The kids enjoyed checking out the schoolhouse Gaudi built for the children of the workmen. Alex did several of the math problems left on the board and we pointed out how sparse the yard was - no playground?!?

When we realized the hour had slipped away we went to find the tower for our trip and discovered Zoltan couldn't come (FYI, children under 6 not permitted. It was clear on the web site, so says the attendant at the elevator. Not clear enough that we noticed it!) Alex and I went up in one shift, then Terry went on his own while I took the kids outside to each their sandwiches.  Terry would have taken longer up there but he ran out of room on the SD card so couldn't take any more photos. After lunch we finished exploring and then headed to the playground we could see from the tower.
Posted by Lynne at 10:00 PM